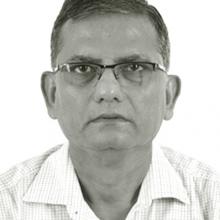 Dr. Parth Sarathi Roy is a Senior Fellow with the Sustainable Landscapes and Restoration program at World Resources Institute, India.

He moved into this position after completing his tenure with International Crops Research Institute for the Semi-arid Tropics (ICRISAT) as a Senior Advisor and National Academy of Sciences India (NASI) Platinum Jubilee Fellow. Post superannuation, he joined the Centre for Earth, Ocean and Atmospheric Sciences, University of Hyderabad as a Chair Professor for six years and continues to be a Visiting Fellow staying true to his purpose of imparting knowledge.

Dr. Roy is an Earth Observation and Spatial Ecology expert who has pioneered generation of information on natural resources and services using Earth Observation Systems for both India and global programs, inspiring many young scientists of this era. With a career spanning over 43 years, Dr. Roy served the Indian Space Research Organization (ISRO) for 35 years and retired as the Director of Indian Institute of Remote Sensing and Director of Centre for Space Science and Technology Education in Asia and the Pacific (CESSTEP – United Nations). His contributions have been instrumental in shaping national policies in the field of forestry, biodiversity, conservation science and landscape ecology. Even with an extensive administrative career, his passion for academics and research led him to publish over 380 research articles in prominent international journals. He has authored four books and guided 27 doctoral researchers.

Dr. Roy was first recognized as a promising young scientist back in the year 1983 when he successfully led India’s first ever forest cover mapping and monitoring. From then on, there was no looking back. He initiated and led the National Natural Resource Census (NRC) during 2005-11 that generated geospatial information on geomorphology, wetland, snow and glaciers, soil type, land degradation, forest cover and land use and land cover maps. He built inter-institutional teams to create decadal Land use and Land cover maps (1985-1995-2005) and first New Vegetation Type map of India using satellite remote sensing.

One of his finest contributions that added a new paradigm in disaster risk assessment and reduction was establishing the National Database for Emergency Management (NDEM). This severed the Prime Minister’s Office, Ministry of Home Affairs, different states and relevant institutions. He went on to establish a first-of-its-kind 24X7 Decision Support Centre (DSC) at National Remote Sensing Centre, Hyderabad. At the behest of the erstwhile Planning Commission, Government of India, Dr. Roy developed a unique project titled, “Space based Information Support for Decentralised Planning” intended toward inclusion of people from the grass root in planning and information collection and dissemination using geo-informatics and IT tools. He was a member of High Level Working Group on Western Ghats that facilitated geospatial analysis to determine Eco sensitive Zones.

Dr. Roy has also led several international programs like Forest Canopy Density (FCD) of logged over forests under the aegis of International Tropical Timber Organization (ITTO) in South East Asia and South Asia and Mapping of vegetation and land use cover south central Asia using SPOT VEGETATIO under the TREE program. The latter’s dataset is a part of Global Vegetation Mapping Monitoring Program of European Commission and Millennium Ecosystem Assessment (MEA). United Nations Office on Drugs and Crime (UNODC) commissioned a special project to Dr. Roy for the examination and evaluation of the cultivation of narcotic crops in Afghanistan. He has been a Visiting Professor/Scientist at three international universities namely University of Illinois, Urbana - Champaign, US and University of California, Davis and ITC, University of Twente, The Netherlands.

An avid reader, Dr. Roy strongly believes that one never stops learning and is enjoying the fast-paced digital advancements toward sustainable development.