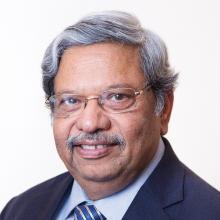 Om Prakash (O.P.) Agarwal is the CEO of WRI India where he leads a team of over 200 researchers. He is a highly respected thinker and practitioner with a wealth of experience in public policy issues related to urban development, poverty alleviation, capacity building, governance and environment.

O.P. was a member of the Indian Administrative Service (IAS) from 1979 to 2007, during which he held several positions with the national and state government of Assam. In this time, he was also the Joint Secretary (Training) in the Department of Personnel and Joint Secretary (Urban Transport) in the Ministry of Urban Development. He was Secretary for Transport in the State of Assam. He was the principal author of India’s National Urban Transport Policy, which was adopted in 2006 and has remained the key document guiding urban transport investments since then.

He was the World Bank’s global Urban Transport Adviser, in Washington DC, for over six years and led the knowledge development and capacity building function for urban transport in addition to advising on several projects. O.P. also chaired the U.S. Transport Research Board’s Committee on Transportation in Developing Countries for six years.

He has written several papers on urban transport policy and governance issues. His book “Emerging Paradigms in Urban Mobility Planning, Financing and Implementation” was published by Elsevier in 2018.