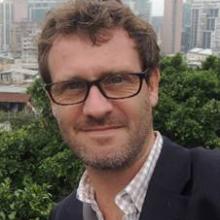 Nicholas Walton is WRI's communication manager for Europe, where he is working to increase WRI's profile and influence. He is based in Den Haag, in the Netherlands.

His background is as a journalist and a writer. He worked for 14 years as a radio and TV foreign news journalist at the BBC, including postings as the news correspondent in Sarajevo and in Warsaw. He was also based in Moscow, and has reported around the world, from Sierra Leone to Georgia, and from Kosovo to the US. Back in London he mainly worked in radio, making and editing programmes and working as the BBC World Service newsroom's Europe editor.

After the BBC, Nicholas worked as the communications director of the foreign policy think tank, the European Council on Foreign Relations. He has published two books, on the Italian city of Genoa and on Singapore, and spent a couple of years writing white papers and reports for the Economist Intelligence Unit, mainly about education and digital media.

Nicholas is originally from the English city of Newcastle, but has lived around the world. He has a Bachelors and Masters in Politics, Philosophy and Economics from Oxford University, and a Masters in Conflict, Security and Development from the Department of War Studies, at King's College London. He lives in Delft with his wife, son and dog, spending his spare time cooking, writing and walking.