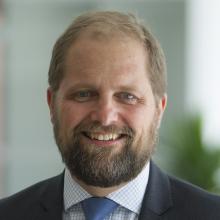 Kristian has more than two decades of strategic and senior management experience in the areas of ocean policy and science, environment, sustainability and development. He has broad international high-level experience in more than 35 countries, negotiating and managing projects in the public and private sectors.

In addition to serving as director of the Sustainable Ocean Initiative at WRI, Kristian is head of the Friends of Ocean Action for the World Economic Forum. Until early 2018, he was the senior marine adviser to the Prince of Wales’s International Sustainability Unit, and the director of engagement for the Ocean Unite network, an initiative of the non-profit arm of the Virgin Group. From 2012 to 2016, he was the director of global engagement at the Global Ocean Commission. Kristian has also served as vice president of SeaWeb (2009-2012), where he was responsible for sustainable-markets, science, and Asia-Pacific programmes, head of the marine programme at UNEP - World Conservation Monitoring Centre (2006-2009), and director of the International Coral Reef Action Network (2001-2009).

Kristian is on the boards of several environmental, development and social initiatives, and the editorial board of the journal Aquatic Conservation. He has degrees from the University of California, Santa Barbara, and Cambridge University.