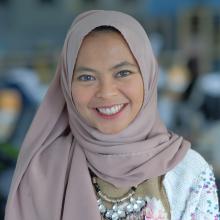 As the Ocean & Plastic Waste Manager, Kirana plays a key role in developing, implementing, and managing cross programmatic initiatives within ocean and plastics waste contexts across the Climate. Energy, Cities and the Ocean portfolios. Kirana has worked for 10+ years on ocean management, including roles as Policy, Engagement Specialist and then Manager for National Plastic Action Partnership (NPAP), taking part in the Global Plastic Action Partnership (GPAP) hosted at World Economic Forum (WEF) plan to support the Indonesian government in reducing 70% ocean plastic by 2025, by leading analysis and collaboration with 150+ members of government, corporate and NGOs.

She has a scientific background in Marine Science and finished her postgraduate program in September 2019 with Chevening Scholarship at University College London on Environment, Politics, and Society and researched on “Ocean Plastic, Politics of Scale and Indonesia’s National Plan of Action”.

In October 2019, she joined eXXpedition Round the World, an all-female crew sailing voyage and scientific research on the mission of ocean plastic pollution. She was humbled to become the first Indonesian woman to join a 2-weeks sailing expedition crossing the North Atlantic Ocean from Plymouth UK to Azores, Portugal and received a bursary from International Maritime Organisation (IMO).

Before her postgraduate study, she was doing a United Nations-Nippon Fellowship program in 2018 at Division Ocean Affairs and Law of the Sea (DOALOS) in New York City and continued with advance-research on ocean governance at Australian National Centre for Ocean Resources and Security (ANCORS) in Wollongong University, Australia. Also, she worked for nearly 3 years at a multilateral organization named Regional Secretariat of Coral Triangle Initiative on Coral Reefs, Fisheries and Food Security in Indonesia, Ministry of Marine Affairs and Fisheries as a consultant assistant under work unit Coastal Community Development Project (CCDP/IFAD) for alternative sustainable livelihood, and Friends of the National Parks Foundation, a local conservation NGO focused on conservation and community development.

In her spare time, she loves to travel, yoga, being in the water (swimming or diving) and exploring local coffee shops.