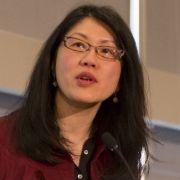 Dr. Seto is an expert in urbanization and global change, urban mitigation of climate change, and satellite remote sensing. Professor Seto has pioneered methods to reconstruct land-use dynamics with satellite data and to forecast the expansion of urban areas. She has conducted urbanization research in China for twenty years and in India for ten. She was one of the two Coordinating Lead Authors for the urban chapter of Working Group III of the IPCC Fifth Assessment Report, and has served on many U.S. National Research Council Committees, including the NRC Committee on Pathways to Urban Sustainability. From 2000 to 2008, she was on the faculty at Stanford University, where she held joint appointments in the Woods Institute for the Environment and the School of Earth Sciences. She was named an Aldo Leopold Leadership Fellow in 2009. She joined the Yale faculty in 2008.