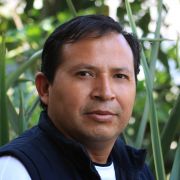 Jorge is a messenger from WRI Mexico responsible for delivery of mail and shipments. In addition, he collaborates in the logistics of events and supports administrative issues. He has more than 13 years of work in the organization, being on eof the the first team members.

Jorge previously worked at the Environmental Commission of the Megalopolis (CAMe) where he served as Deputy Director General of Sustainable Urban Development. He has also worked as advisor and consultant for several institutions such as the World Bank, Environmental Ministry of Mexico, Interamerican Development Bank, UNEP, etc.