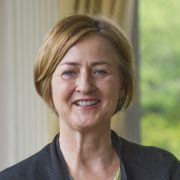 Joke Brandt has served as the Secretary General of the Dutch Ministry of Foreign Affairs since 2016. Before her appointment as Secretary General, Brandt served as the Deputy Executive Director for the United Nations International Children’s Emergency Fund (UNICEF), and held various positions in the Dutch government, including Director General of International Cooperation at the Dutch Ministry of Foreign Affairs and the Ambassador of the Netherlands to Uganda and Eritrea. She also worked as the Regional Director for West and Central Africa for the Netherlands Development Organization.

Across her various roles, Brandt has shown a deep commitment to public service. She brings expertise in international cooperation, response to humanitarian disasters, and equitable and sustainable development.

She has lived and worked in Uganda, Eritrea, Kenya, and South Africa. Ms. Brandt holds a master’s degree in geography and development from Utrecht University in the Netherlands.