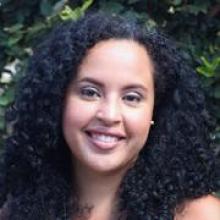 Iara Vicente is an Engagement Analyst at WRI Brasil. She works in the implementation of the New Economy for Brazil (NEB), New Economy for the Amazon (NEA) and Air Quality initiatives.

Prior to WRI, Iara was an executive director at the consulting firm Nossa Terra Firme, a researcher at the Amazon Institute of Man and Environment (IMAZON) and a project assistant at the Esquel Brasil Foundation. She has also done consulting work with institutions such as New York University (NYU), 350.org, Sierra Club and Global Academy Foundation. She also worked with monitoring of social and environmental impacts in development projects and with the formulation of public policies, such as the Community Environmental Agents Program, currently being implemented in the State of Pará. She also contributed to the development of projects in social and environmental entrepreneurship in Latin America, the Caribbean and Africa .

Iara is a sociologist from the University of Brasília and a Master in Public Administration in Environmental Science and Policy from Columbia University. She was awarded the Lemann Fellowship in 2016 and selected as one of the 1000 Talents for Fulfilling Sustainable Development Goals by the UNLEASH Innovation Lab in 2017.