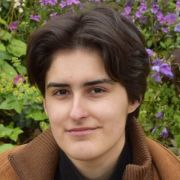 Gianna Ferrarin is an intern on the Cities Action Track and Finance Action Track teams within the Global Commission on Adaptation. She provides research and engages stakeholders on the role of universities in building urban resilience, and analyzes data on funding for adaptation. Her work supports WRI's preparation for the 2021 Climate Adaptation Summit in the Netherlands.

Prior to joining WRI, Gianna studied urban transportation and analyzed public data as a research assistant, city planning intern, and student in Philadelphia. Gianna also worked as a student journalist at The Daily Pennsylvanian for three years and was awarded Reporter of the Year in 2018.

Gianna holds a B.A. in both Urban Studies and Computer Science from the University of Pennsylvania, which she graduated from in May 2020.