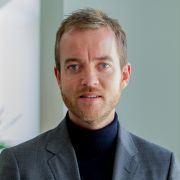 Esben is a fellow in Food, Forests, and Water.

Prior to joining WRI, Esben had a political career in the Kingdom of Denmark as Member of City Council from 2006-2014, Deputy Mayor from 2010-2014, Member of the Danish Parliament from 2011-2018 and Cabinet Minister in Her Majesty the Queens Government from 2015-2018. First as Minister for Higher Education and Research and secondly as Minister for Environment and Food. Being a farmer's son, Esben always had an interest in food, forest and agriculture.