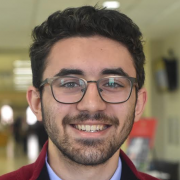 Dhruva Someshwar is an Urban Mobility Intern in the Ross Center for Sustainable Cities. He works to conduct research on the safety impacts of urban mobility policies and city planning, as well as assisting on written and graphic content for project reports and publications.

Outside of WRI, Dhruva is an undergraduate student at the University of Maryland, College Park. He double majors in Government & Politics and Economics, as well as minoring in Sustainability Studies. Dhruva plans to graduate in December 2021.

While not in class, Dhruva serves as the VP of Finance for Maryland's Parliamentary Debate Society.

When outside of College Park, Dhruva lives in Morgantown, West Virginia with his family, three dogs, and cat.