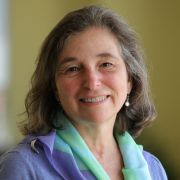 Deborah (Debby) is the Editorial Manager at WRI, working with the Communications team and others to help spread WRI’s message. That means blogs, informed opinion pieces, public relations material and internal communications are aspects of her job.

She comes to WRI from a career in the news business, starting as a reporter and editor at The Associated Press and moving on to Reuters, where most recently she was the U.S. environment correspondent. Before that, in New York and Washington, she covered high-profile trials, a couple wars, the White House, the Pentagon, Congress, the State Department and NASA and astronomy. She was also a labor leader, serving on the national executive board of The Newspaper Guild.

She earned a Bachelor of Arts degree in Oriental studies from Barnard College and a Master of Journalism degree from the University of California-Berkeley. She won fellowships at the University of Hawaii, the National Center for Atmospheric Research in Boulder, Colorado, and McMurdo Station in Antarctica.

Debby lives in Bethesda, Maryland, with her husband John Doyle. She walks four miles a day and is the better for it. She has a terrible baking habit that she just can’t seem to shake. She collects pop-up books.