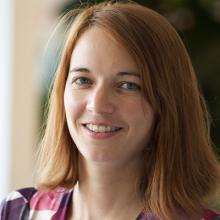 Cyrielle Hamlett joined WRI in 2015 as a program, grants and finance coordinator. She now works as the US and Europe payroll manager within the operations team.

Prior to joining WRI, Cyrielle worked in Paris as a global mobility consultant at AXA where she coordinated international HR activities of the group’s expatriate department. Having previously volunteered as a fundraising and major gift officer at the Carter Center and at Ninos de Guatemala, Cyrielle Hamlett comes to WRI with experience in international business development in France, Spain, Guatemala and the United States for both non-profit and for-profit organizations

Cyrielle earned her Masters in International Relations at the Sorbonne University in Paris for which she studied as an international student at UC Berkeley. She also holds an MBA from the Ecole Normale Superieure des Arts et Metiers in Paris.

Born and raised in France, Cyrielle is naturally passionate about food. She enjoys music and arts and learning about other cultures.