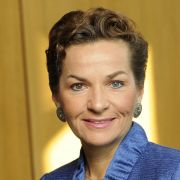 Christiana Figueres is a world authority on global climate change and was the Executive Secretary of the UNFCCC from 2010-2016. Ms. Figueres is currently Vice-Chair of the Global Covenant of Mayors for Climate and Energy, ClimateWorks Board Member, World Bank Climate Leader and Mission2020 Convenor.

During her tenure at the UNFCCC Ms. Figueres brought together national and subnational governments, corporations and activists, financial institutions and communities of faith, think tanks and technology providers, NGOs and parliamentarians, to jointly deliver the historic Paris Agreement on climate change, in which 195 sovereign nations agreed on a collaborative path forward to limit future global warming to below 2C. The agreement entered into force in less than a year, breaking the record of the UN. For this achievement Ms. Figueres has been credited with forging a new brand of collaborative diplomacy.

In addition to her remarkable diplomatic achievements over the past 20 years, she served as Director of Renewable Energy in the Americas (REIA) and in 1995 founded the non-profit Center for Sustainable Development of the Americas (CSDA), which she directed for eight years.