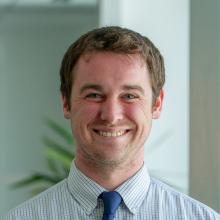 Auston is a Project Coordinator in the Energy Department's Renewable Cities Program. He works to expand several U.S. cities' use of renewable energy in their current energy grids.

Prior to joining WRI, Auston worked as a project coordinator, invasive species management specialist, and an assistant land steward. He held his project coordinator position at Global Environment and Technology Foundation, an international water beneficiary non-profit. His work has helped to provide water to several countries with the help of partners such as SOS Childrens' Villages and Mercy Corp, among others.

Auston holds a B.A. in Urban-Environmental Studies from Birmingham-Southern College. In 2017, he completed his Master's Degree at Duke University's Nicholas School of the Environment with a concentration in Water Resource Management.