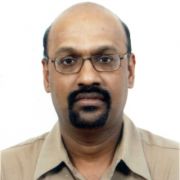 Arivudai Nambi Appadurai (Nambi) is the India Adaptation Strategy Head for the Climate Resilience Practice and WRI India. Nambi is a climate change adaptation specialist with research and project management experience at the national and international levels. Most of his research has focused on climate risk management and adaptation in Asia and Africa. He has extensive experience using participatory approaches to support climate risk mainstreaming, as well as working with both communities and government officials on climate risk planning and up-scaling best practices. He is currently exploring ways to integrate adaptation into development processes at the national and community levels, and he is developing partnerships and strategies for WRI’s climate adaptation work in India.

Prior to joining WRI, Nambi worked with the M.S. Swaminathan Research Foundation as the Director of the Climate Change Programme. In that role, he managed a variety of projects related to climate adaptation, specifically designing, developing, and field-testing risk management interventions at the community level. He is a member of many expert committees set up by various ministries of the Government of India to study climate impacts, and he serves on various working groups formulating State Climate Action Plans. His international career includes a stint with the Millennium Ecosystem Assessment Programme as a Senior Associate and consulting work with CGIAR, World Bank, UNEP, ABD and UNIDO. In the past, he was part of the official Indian delegation to the international climate negotiations.

Nambi’s passions include cricket, Indian classical music, and serving as a scribe for the visually challenged.