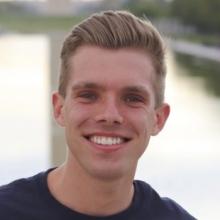 Anthony Laurita is a Gender Equity Practice Intern in the Center for Equitable Development at the World Resources Institute. He works to integrate gender and social equity across the institute through quantitative and qualitative research. His interests are to work with the Climate and Energy Programs to advance the role of women and diversity within international climate policy making and advising. Anthony is a second-year graduate student at the John’s Hopkins University School of Advanced International Studies focusing on energy and environmental policy.

Prior to joining WRI, Anthony spent two semesters in Bologna, Italy as a first-year graduate student, was a member of the SAIS-Europe student government, and worked as a research assistant for the Bologna Institute for Policy Research. He hopes to pursue a career researching and advising policymakers on renewable energy and climate strategies.

Anthony also holds a B.A. in Political Science from Colorado State University where he published articles on U.S.-Iranian relations during the Trump Administration, worked for various state legislators, and ran for scholarship during his freshman and sophomore year in which he competed at NCAA Division 1 Cross Country Nationals.

When not working, you can find Anthony trying new coffee shops around the D.C. area, participating in various sports with an LGBTQ+ community-based non-profit, and exploring new elements to a plant-based diet.