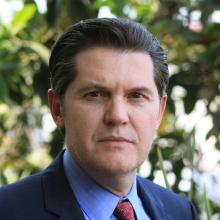 Andrés is Director of Climate Change and Energy at WRI Mexico. His focus topics include mitigation of greenhouse gases and adaptation to climate change, energy efficiency, clean energy and circular economy.

His professional experience includes more than twelve years at the National Institute of Ecology and Climate Change (INECC) where, among other positions, he was over time Director of Climate Change, General Director of Environmental Policy and Economics, and General Coordinator of Green Growth. Besides, he was Assistant General Director of the Megalopolis Environmental Commission and Coordinator of Projects at the Mario Molina Center. On multiple occasions, he acted as Mexican delegate to the United Nations Framework Convention on Climate Change, the G2o, and the Intergovernmental Panel on Climate Change. Andrés graduated with honors as an economist from the National Autonomous University of Mexico (UNAM).

He holds a Master´s Degree in Economics, from Monterrey Tech. (ITESM); a Master´s in Environmental Technology from Imperial College London, and a Ph.D. in in Energy and Environment from the Massachusetts Institute of Technology (MIT).

He has published several articles and book chapters on topics related to environmental economics, climate change, and the interface between energy and the environment.