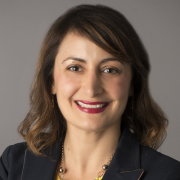 As a strategic communicator, Amy works to give the ocean a voice that matches its size, scale and scope. More than being 70% of our planet, it has been a villain and victim throughout history to present day; an emerging view is it is indeed a solution to global problems - if we sustainably manage our impacts on it.

Within the Initiative sits the High Level Panel for a Sustainable Ocean Economy (HLP). Made up of 14 sitting heads of government representing 30% of the world’s coastlines, the HLP is advancing a transformative action agenda that defines what sustainability means for the ocean and facilitates equitable prosperity by better connecting ocean protection and production. Amy is leading an integrated communications program to position the HLP and its work in this Super Year for the Ocean.

Before moving to London in summer 2019, Amy spent 15 years of her career in Washington, D.C. with brief stints in Nagoya, Japan and Calgary, Canada. Prior to WRI, she was an executive vice president at Edelman, the world’s largest, independent communications firm. Most of her 13 ½ years with Edelman was in the energy sector, and she served as the firm’s first-ever global sector chair for energy.

Amy has worked on a variety of special projects at the local, state, national and international levels: she served as the government relations director for U.S. participation in the 2005 World Exposition in Aichi, Japan; worked on political campaigns; planned the City of Philadelphia's Millennium Celebration; and opened the National Constitution Center in Philadelphia.

In DC’s Petworth neighborhood, Amy was elected to a two-year term as Advisory Neighborhood Commissioner, the city's most hyper-local form of government. She is originally from Philadelphia, Pennsylvania, holds a B.A in Urban Studies and Masters in Public Administration from the University of Pennsylvania, and is a big Philadelphia sports and food fan. Her family enjoys traveling the world, visiting MLB ballparks and CrossFit.