Nutrient pollution and eutrophication are strongly linked with other global environmental issues like climate change, air pollution and acid rain. Policymakers should exploit the linkages between eutrophication and other local, regional, and global environmental issues and identify those policies that minimize tradeoffs and maximize environmental benefits. Combustion of fossil fuels, for example, emits nitrogen oxides (NOx), which can be a significant source of nutrient pollution to aquatic ecosystems through the process of atmospheric deposition (Spokes and Jickells 2005). 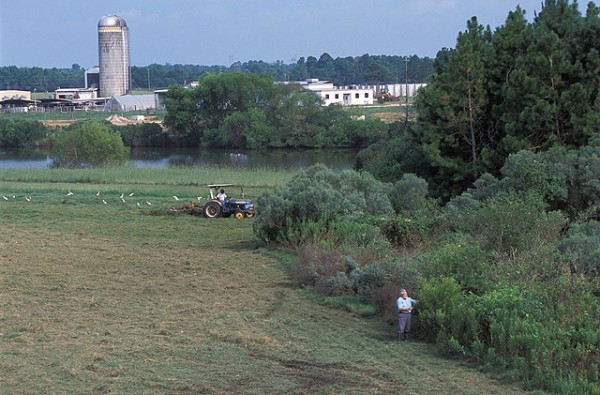 NOx also contributes to other environmental problems such as acid rain and smog. In addition to NOx, combustion of fossil fuels also releases significant amounts of carbon dioxide into the atmosphere—the gas that is primarily responsible for climate change. Policies aimed at reducing combustion of fossil fuels through energy conservation, energy efficiency, and promotion of alternative energy thus have multiple environmental and public health benefits (Moomaw 2002). Fig 2. Compost production from organic waste in Batam, Indonesia. This is part of a sustainable development scheme aiming to limit land-based pollution in the South China Sea. Farmers collect and treat organic wastes to produce fertilizer which can then be used on their crops and as an additional source of income.

Image Credit: UNEP 2007 In contrast, policies aimed at mitigating eutrophication that are narrowly focused on regulating wastewater treatment plants have very few environmental co-benefits. In fact, many of the advanced nutrient removal technologies that would be installed by wastewater treatment plants use significantly more energy—which, depending on the method of energy generation, may lead to greater emissions of NOx and carbon dioxide—and possibly emit a significant portion of the captured nitrogen into the atmosphere through volatilization (Foley et al 2007). While primary and secondary treatment of sewage discharges from wastewater treatment plants is important for human health, it is necessary for policymakers to weigh tradeoffs of advanced tertiary treatments and ensure that the selected policies adequately consider the various sectors, sources of nutrient pollution, and other environmental issues.