Within the past 50 years, eutrophication---the over-enrichment of water by nutrients such as nitrogen phosphorus---has emerged as one of the leading causes of water quality impairment. The two most acute symptoms of eutrophication are hypoxia (or oxygen depletion) and harmful algal blooms, which among other things can destroy aquatic life in affected areas. 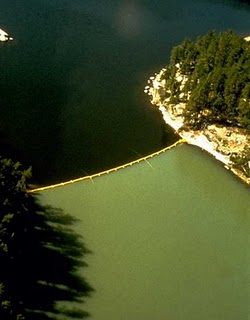 The rise in eutrophic and hypoxic events has been attributed to the rapid increase in intensive agricultural practices, industrial activities, and population growth which together have increased nitrogen and phosphorus flows in the environment. The Millenium Ecosystem Assessment (MA) found that human activities have resulted in the near doubling of nitrogen and tripling of phosphorus flows to the environment when compared to natural values.

Before nutrients—nitrogen in particular—are delivered to coastal ecosystems, they pass through a variety of terrestrial and freshwater ecosystems, causing other environmental problems such as freshwater quality impairments, acid rain, the formation of greenhouse gases, shifts in community food webs, and a loss of biodiversity.

Once nutrients reach coastal systems, they can trigger a number of responses within the ecosystem. The initial impacts of nutrient increases are the excessive growth of phytoplankton, microalgae (e.g., epiphytes and microphytes), and macroalgae (i.e., seaweed). These, in turn, can lead to other impacts such as: loss of subaquatic vegetation, change in species composition, coral reef damage, low dissolved oxygen, and the formation of dead zones (oxygen-depleted waters) that can lead to ecosystem collapse.

Video: What is Eutrophication?