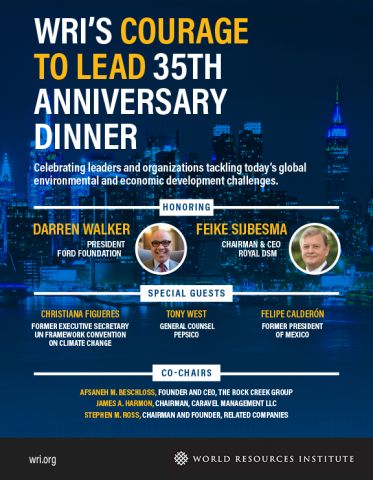 NEW YORK (October 12, 2017) —World Resources Institute (WRI) is honoring Darren Walker, President of the Ford Foundation, and Feike Sijbesma, CEO of Royal DSM, at its 2017 Courage to Lead dinner, an event recognizing bold leadership that confronts pressing environment and human development challenges. At their respective organizations, this year’s honorees are demonstrating leadership that is shaping their industries and influencing their peers.

“We are very proud to be honoring these two remarkable individuals, Darren and Feike, who are pushing the envelope in their fields. We hope that shining a light on their achievements will inspire more people to step forward with courageous leadership that benefits people and the planet,” said James A. Harmon, Chairman, Caravel Management LLC and Board Chairman, WRI. “These leaders and their organizations share common values with WRI, seeking to address the root causes of inequality and create sustainable growth for the world.”

Darren Walker leads the Ford Foundation, the second largest philanthropy in the U.S., where he brings a sharp focus to issues of inequality and community development. Earlier this month, the Ford Foundation together with the governments of Norway and Sweden created the first-ever global pact to provide grants that advance the rights of indigenous peoples to help them protect their land and resources. WRI analysis* shows that indigenous communities are the best guardians of the forests they inhabit, and secure land rights would reduce carbon emissions and generate billions in co-benefits. Walker has steered the Ford Foundation toward mission-related investing (MRI), including a commitment to invest $1 billion of its endowment in a socially and environmentally responsible way.

“Around the world we are confronted with pernicious challenges which pose a risk to our collective future. Inequality is at the root of the majority of these issues,” said Darren Walker, president, Ford Foundation. “Now is the time to use every tool available, including our investment capital and assets, to strengthen and protect the communities and resources vital to our ability to disrupt inequality in all its forms.”

Since its founding in the early 20th century, Royal DSM has evolved from a state-owned coal mining company to a chemical company to a Life Sciences and Materials Sciences company. As CEO, Feike Sijbesma has been an outspoken champion of reimagining the economic system and corporate responsibility to go beyond profit and incorporate people and planet in value creation. He believes companies should shift away from fossil fuels and move to renewable energy. His leadership has been evident in pushing carbon pricing to the top of the international agenda by serving as co-chair of the Carbon Pricing Leadership Coalition in calling for countries to establish a meaningful price for carbon, as well as putting an internal price on carbon of EUR50 per ton at DSM to ‘future proof’ the business.

Sijbesma has also led the company to use its work on nutrition-science to tackle famine and malnutrition in new and innovative ways, including a partnership with the World Food Programme that is feeding more than 31 million children and women per year. Sijbesma is one of the World Bank’s Climate Leaders and at DSM is known to be an exemplar of the company’s informal internal motto: “Do Something Meaningful.”

“Today, business has much more power and impact than ever before. This increased impact comes with increased responsibility to address the issues that need to be solved such as climate change and malnutrition,” said Feike Sijbesma, CEO, Royal DSM. “Therefore, business has a key role to play. DSM remains committed to developing innovative, science-based solutions that will help to create a brighter future for people today and generations to come.”

“In these urgent times, the world needs more leaders who are willing to question traditional approaches and drive breakthrough solutions. Darren and Feike represent this kind of leadership,” said Andrew Steer, president & CEO, WRI. “We are very proud to honor these individuals. Both honorees are advocating for the kind of change that is at the heart of WRI’s mission to protect people and planet.”

At the event, WRI will announce the establishment of the WRI Ross Prize for Cities, a global competition, supported by Stephen M. Ross, to identify, celebrate and replicate transformative urban initiatives in developing countries. Beginning in January 2018, WRI Ross Center for Sustainable Cities will accept nominations from individuals or groups for projects that sparked transformative urban change. A jury of mayors, leading urban thinkers and private sector representatives will select five finalists. The winner will receive the award and a prize of $250,000.

Courage to Lead 2017 brings together more than 350 leaders in business, government, philanthropy and civil society at Cipriani’s in New York City. Learn more at www.wri.org/courage-to-lead.