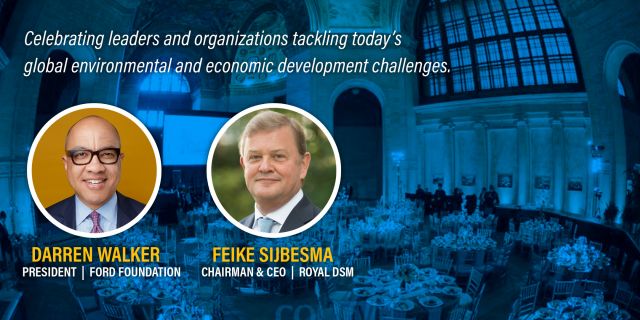 Ford Foundation is one of the world’s leading philanthropies. Under Darren Walker, Ford is putting all its tools to work, including $1 billion from its endowment over the next 10 years toward Mission-Related Investments, including the drivers of inequality. This bold move seeks to spur more foundations to do the same and help the capital markets become accelerators of justice and fairness.

Royal DSM, originally a state-owned coal company, is a Dutch multinational corporation now active in the fields of health, nutrition and materials. Royal DSM ranks #2 on Fortune’s annual Change the World list and its Chairman and CEO Feike Sijbesma is a global leader on climate action and malnutrition. Mr. Sijbesma is Climate Leader for the World Bank and co-chairs the Carbon Pricing Leadership Coalition. In addition, he co-leads the CEO Climate Alliance of the World Economic Forum of over 60 companies catalyzing corporate action to reduce GHG emissions and help drive the global transition to a low-carbon, climate resilient economy.

There will be a photo opportunity at the event.

All media must RSVP to ally.friedman@wri.org