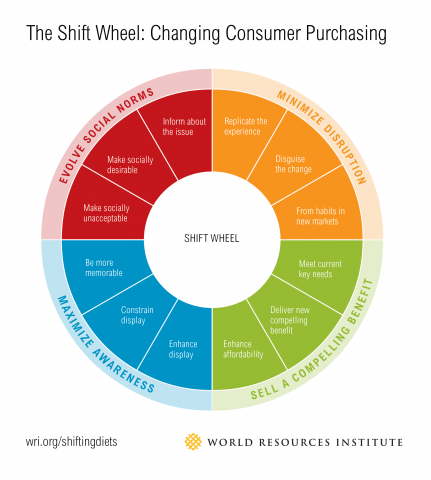 The paper is the 11th installment of the World Resources Report: Creating a Sustainable Food Future, which is exploring ways to close a 70 percent gap between food available today and expected demand in 2050. WRI finds shifting to diets with a greater share of plant-based foods can help close the food gap by 30 percent.

A growing body of research suggests rising consumption of meat and dairy is putting increasing pressure on land, water and the climate. Beef stands out for its high environmental impacts—beef uses 20 times more land and generates 20 times more greenhouse gas emissions than beans (per gram of protein). Beef also costs at least 3 times more than beans. Shifting Diets shows that when factoring in land use, the greenhouse gas emissions from people’s diets are almost on par with their energy use.

Vegetarian and vegan diets have much lower environmental impacts than the average American diet, but it is unrealistic to think everyone will stop eating meat. Working with modelers at CIRAD and INRA, WRI evaluated 8 alternative diet scenarios and found the average American could cut their diet-related environmental impacts by nearly half just by eating less meat and dairy. Even small dietary shifts—like replacing beef with chicken or fish—can significantly reduce agricultural resource use and greenhouse gas emissions.

Many people—especially in rich countries—eat much more protein than they need, so WRI shows that they could cut back on meat and dairy while easily meeting their protein needs. For example, the average American man eats nearly 100 g of protein per day, almost double the amount of protein he needs (56 g). A much smaller gap than people realize exists between how much protein they need and how much they’re already getting from plant-based sources like beans, grains, soy and vegetables. To make sustainable diet choices easier for consumers, WRI introduces a new Protein Scorecard ranking foods from lowest (plant-based foods) to highest impact (beef, goat and lamb).

The trickier question is how to move billions of people toward diets with a greater share of plant-based protein. It will be necessary to go beyond just information and education campaigns—which typically change attitudes of a few—and engage the food industry to use a broader set of strategies that can change mainstream consumer behavior.

As a next step, WRI will put the Shift Wheel into action by forming a coalition of leading food service companies, food manufacturers, and restaurants to develop and test new ideas.

Janet Ranganathan, Vice President for Science and Research, WRI
“Food is the mother of all sustainability challenges. We are what we eat and what we eat has a profound impact on the planet. Around the world people are converging on diets high in calories, meat and dairy, with dire consequences for the health of the planet. Shifting Diets should be on the agenda of every world leader. It’s a threat multiplier, driving water insecurity, deforestation, climate change, and a global epidemic of diet-related chronic diseases."

Daniel Vennard, Senior Fellow, WRI
“Consumers typically shop on habit, picking up what they remember or see in store. Simply telling someone about the environmental impact of what they buy has minimal influence. We need creative new solutions that work in line with how an average person actually shops and orders, which is why we created the Shift Wheel.”

Tim Searchinger, Senior Fellow, WRI
“Factoring in land use demands make dietary choices far more significant than previous studies have estimated. The greenhouse gas emissions caused by consuming an average American’s diet approach those of their energy use when you factor in the amount of forest and woody savanna that is lost to produce that food."

Miriam E. Nelson, PhD, Director, Sustainability Institute at the University of New Hampshire and member of the 2015 Dietary Guidelines for Americans Committee
“The call by WRI’s Shifting Diets for a Sustainable Food Future to increase the share of plant-based protein in diets is consistent with the findings in the 2015 US Dietary Guidelines for Americans Advisory Report – suggesting that what’s good for people is also good for the planet.”