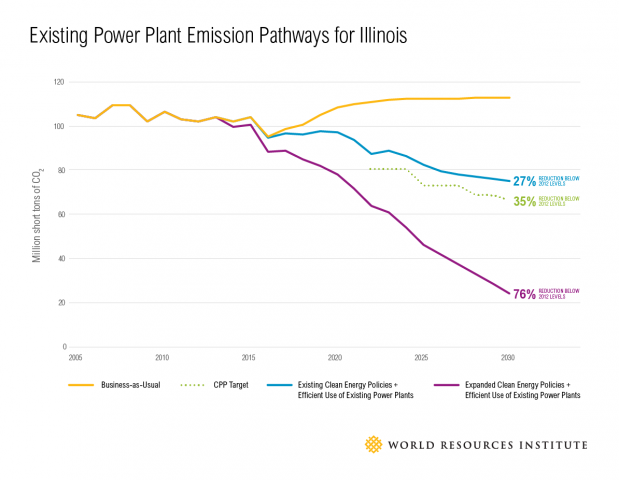 WASHINGTON (April 28, 2016)–New analysis from World Resources Institute shows that Illinois is in a strong position to meet or exceed its emissions target under the EPA’s Clean Power Plan (CPP) to reduce emissions from the power sector. WRI finds that Illinois can get more than halfway towards complying with the CPP by meeting its existing energy efficiency and renewable energy targets. By passing the Clean Jobs Bill and removing existing barriers to further action, Illinois can grow its economy while reducing emissions.

Despite the Supreme Court’s stay of the CPP, some states are moving forward in their efforts to cut emissions from the power sector and prepare for future compliance. The measures Illinois can take to cut power sector emissions—like implementing energy efficiency programs and increasing use of renewable energy—make good economic sense regardless of the CPP’s politics.

Under the Clean Power Plan, Illinois must reduce its power sector emissions by 34-35 percent below 2012 levels by 2030. WRI’s fact sheet How Illinois Can Meet Its Clean Power Targets finds that achieving Illinois’ current targets to improve energy efficiency and increase renewable energy will meet half of the CPP goal. If Illinois also makes more efficient use of its natural gas and coal fleet, it can achieve 34 percent reductions below 2012 levels by 2030. Even better, by removing barriers such as the cost cap on its efficiency program and ensuring payments made under its RPS gets invested in renewable energy, in addition to increasing efficiency in natural gas and coal, the state can achieve 76 percent emissions reductions under 2012 levels by 2030 from the power sector, far exceeding CPP goals.

The Clean Jobs Bill, currently in front of the state legislature, would remove current constraints on Illinois’ energy efficiency and renewable energy policies, and analysis shows that it would save consumers in the state more than $2.6 billion in lower energy and fuel costs through 2030.

Illinois’ energy efficiency and clean energy policies are already benefiting the state. For example,
* Renewable energy supported more than 7,800 jobs in 2013
* The Illinois Energy Now program has created over 17,000 jobs between 2008-14, while leading to $585 million in energy cost savings over the lifetime of the efficient equipment installed

“Our analysis shows that Illinois can already get halfway to its Clean Power Plan emissions reduction target just by following through on its existing efficiency and renewable energy goals. By removing current barriers and taking more aggressive action, the state can go even further,” said Kristin Igusky, associate, WRI. “Illinois can use its efficiency and renewable energy goals to ensure the state continues toward a low carbon future while bringing economic benefits to its residents and businesses.”

The new analysis is the latest installment in WRI’s series, How States Can Meet Their Clean Power Plan Targets. The series examines how selected states can meet, or even exceed, their emissions standards under the CPP while minimizing compliance costs, ensuring reliability, and harnessing economic opportunities in clean energy.