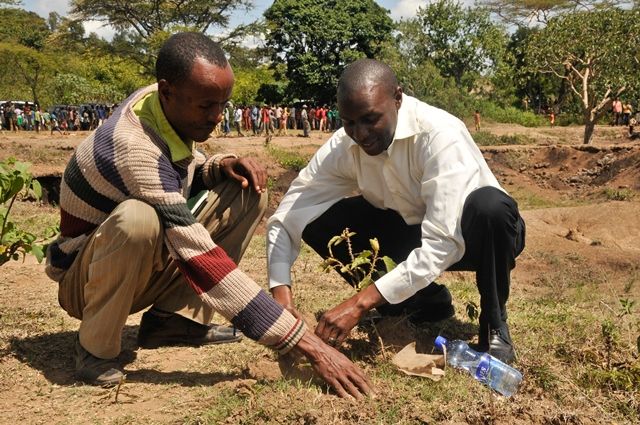 Bonn, Germany (March 21, 2015)– Since 2011, countries participating in the Bonn Challenge have restored more than 60 million hectares of forests and landscapes and are on track to meet an ambitious global restoration goal of 150 million hectares by 2020. Environment ministers from around the world marked the significant progress at the second international Bonn Challenge conference in Germany on March 20 – 21.

The conference brought together environment ministers and government representatives from China, Costa Rica, El Salvador, Ethiopia, Guatemala, Indonesia, Liberia, Republic of Korea, Sweden and the US, along with representatives from key donor countries, such as Germany and Norway, business leaders and nonprofit organizations.

"We are well on our way to achieving our goal of restoring a total of 150 million hectares of destroyed forests by 2020," said Federal Environment Minister Barbara Hendricks. "With the restoration of forests we can pursue multiple objectives simultaneously: We can do something about climate change and species extinction and help restore the livelihoods of millions of people.”

The Bonn Challenge was launched in 2011, endorsed at the 2014 Climate Summit and supplemented by the New York Declaration on Forests with a goal to restore an additional 200 million hectares by 2030.

"Restoring millions of hectares of degraded land is one of the great ideas of our times. It reduces poverty, improves food security, strengthens the economy, and dramatically reduces carbon pollution in the atmosphere. No wonder, then, that political and financial momentum is building across every continent." said Dr. Andrew Steer, President & CEO, WRI. "The Bonn Challenge has been critical in spurring excitement around this idea – with over 60 million hectares already committed toward meeting the goal. New business models are emerging, and deeper technical understanding is fostering unprecedented interest from governments, private sector, and communities."

The conference endorsed regional landscape restoration programs around the globe. Regional programs, such as Initiative 20x20 in Latin America and the Caribbean, and Vision 25x25 in Africa are bringing the global Bonn Challenge closer to the ground, helping it gain traction and turning the goal into a reality. Regional initiatives help countries with similar cultures and land-scapes share experiences and increase private and public financial support.

The conference participants announced plans to launch a series of initiatives and partnerships for the restoration of forests. El Salvador wants to launch a Central American partnership and will host a regional kick-off conference. In Africa, Ethiopia and Liberia are working on the Great Green Wall Initiative, which aims to curb the spread of the Sahara by restoring forests. In Southeast Asia in turn there are ideas to extend the cooperation between governments and companies on forest restoration. The Bonn Challenge sees itself as a platform for action that supports these activities and brings together partners around the idea of "learning from each other - getting things done together".

“We are now at the point where just reducing emissions will not be enough,” said Tine Sundtoft, Norway’s Minister of Climate and Environment. “We must actively remove carbon out of the atmosphere. Forest restoration is the most cost-effective carbon capture option we have. The New Climate Economy Report from last year showed us that conserving and enhancing the forest can be done. And it can be done while also achieving economic growth.”

According to IUCN, achieving the 150 million hectare challenge could bring more than USD 85 billion per year to local and national economies and USD 6 billion in additional crop yields. Achievement of the goal could also reduce the current CO2 emissions gap by 11 to 17 percent.

In addition to restoration commitments from countries and organisations, key donors noted today that they would increase their support for global restoration. Support for restoration is also increasingly coming from private sector sources. The restoration activities of Initiative 20x20, for example, will be partly supported through $365 million USD of commitments from impact investors and bilateral and multilateral funders.

“The world is recognising that forest landscape restoration offers a critical contribution to addressing some of our global challenges, such as climate change, biodiversity, food security and economic growth,” says Inger Andersen, Director General of IUCN, one of the co-hosts of the event. “The Bonn Challenge is about much more than simply planting trees – it’s about addressing the most pressing issues of our generation, and of future generations.”

The Bonn Challenge conference was co-organised by the German Federal Environment Ministry, the Norwegian Ministry of Climate and Environment, the International Union for Conservation of Nature (IUCN) and the World Resources Institute (WRI),

Notes to editors:
To mark the International Day of Forests (March 21) proclaimed by the United Nations, the Bonn Challenge participants have planted a maple tree together as a symbol of their joint efforts. A photo of the event as well as photos of the conference can be found here: www.bmub.bund.de/G49889