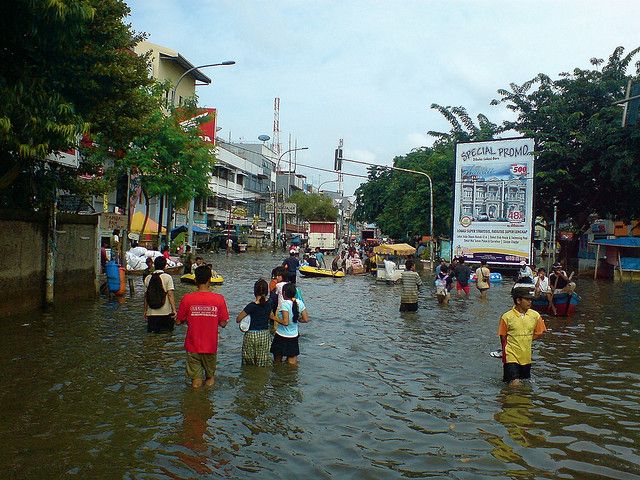 NEW YORK CITY (September 22, 2014)—The World Resources Institute (WRI) and four leading Dutch research organizations launched a four-year initiative, supported by the Government of the Netherlands, that will assess flood risks and recommend practical steps to reduce these risks in different geographic and socio-economic settings globally.

The first phase of the project, set to launch later this year, will be the Aqueduct Flood Analyzer, a first-of-its-kind freely available, open-source analytical tool that will reveal the potential human and economic impacts of current and future flood risks worldwide.

“We are honored to support WRI and our partner network to share the Netherlands’ world-leading flood risk assessment and intervention capacity with the world,” said Wilma Mansveld, Minister of the Environment of The Netherlands. “The forthcoming flood analyzer has the potential to strengthen the resilience and security of communities worldwide—especially for the world’s most impoverished and vulnerable people.”

The forthcoming Flood Analyzer is expected to reach decision makers on national, state, and municipal levels. Finance ministers, state water resources managers, mayors, and others will have easy access to reliable estimates of potential damages from river floods and coastal storm surges, as well as costs and benefits of a broad range of response options.

“This initiative has tremendous capacity to motivate investments that reduce disaster risks,” said Charles Iceland, Senior Manager, Aqueduct. “But we will only make a difference if we work closely and persistently with the government, business, and non-profit users who need this information most.”

The initiative is a collaboration among the World Resources Institute, Deltares, VU University Amsterdam, Utrecht University, and PBL Netherlands Environmental Assessment Agency, supported by the Netherlands Ministry of Infrastructure and Environment. The flood analyzer will be implemented in conjunction with the WRI Ross Center for Sustainable Cities.

WRI is a global research organization that spans more than 50 countries, with offices in the United States, China, India, Brazil, and more. Our more than 300 experts and staff work closely with leaders to turn big ideas into action to sustain our natural resources—the foundation of economic opportunity and human well-being.