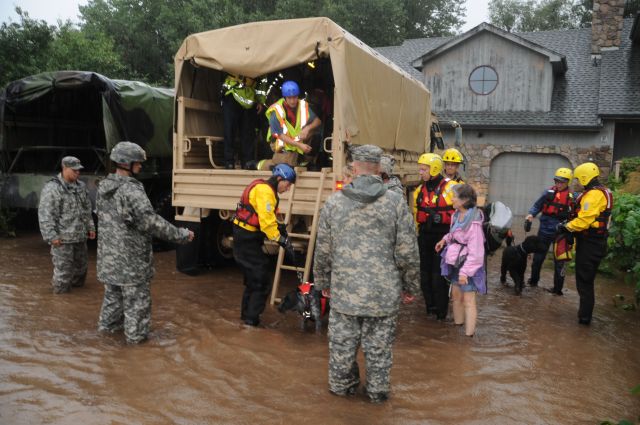 Mayors and city officials from Colorado, Florida, New Jersey, and Utah will be participating in an event in Washington D.C. to discuss how cities are being affected by climate change and what they are doing to adapt to these impacts using state-of-the-art technology and design. The event is being organized by the Union of Concerned Scientists and the World Resources Institute.

Susan Ruffo, the deputy associate director for climate change adaptation at the White House Council on Environmental Quality, will present an update on President Obama’s Task Force on Climate Preparedness and Resilience. The mayors will highlight what they hope comes out of the task force to help them better cope with climate change.

Mayor Matthew Appelbaum, Boulder, Colorado
Appelbaum will discuss one of the worst extreme weather events to hit his town, when a half a year's worth of rain pounded his city for four days in September, as well as Boulder’s vulnerable to drought and wildfire. Appelbaum will highlight what his town is doing to become more resilient.

Mayor Cindy Lerner, Pinecrest, Florida
Lerner, the incoming president of the Miami-Dade County League of Cities, will discuss how the cities are adapting to climate change by replenishing beaches and investing in stormwater drainage system upgrades. She’ll also discuss an environmental lawsuit contesting Miami-Dade’s plan to repair its spill-plagued sewage system because the plan, approved by the EPA, does not take into account sea level rise.

Mayor Ralph Becker, Salt Lake City, Utah
Becker, a member of the president’s climate task force, will introduce the findings of a new study that shows that every degree of warming in his region would result in a significant drop in his city’s drinking water supply. Becker will also discuss how the city’s drinking water sources are at risk due to wildfire burning vegetation around the reservoirs.

Carolyn Berndt, Principal Associate for Infrastructure and Sustainability, National League of Cities
Berndt will provide an overview of what cities around the country are doing to address climate change and discuss the “Resilient Communities” campaign, in which hundreds of locally elected officials have pledged to prepare for climate change.

The Union of Concerned Scientists puts rigorous, independent science to work to solve our planet’s most pressing problems. Joining with citizens across the country, we combine technical analysis and effective advocacy to create innovative, practical solutions for a healthy, safe and sustainable future. For more information, go to www.ucsusa.org.

WRI is a global research organization that spans more than 50 countries, with offices in the United States, China, India, Brazil, and more. Our more than 300 experts and staff work closely with leaders to turn big ideas into action to sustain our natural resources—the foundation of economic opportunity and human well-being.