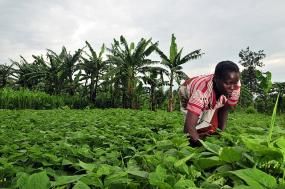 One out of every four calories produced by the global agricultural system is being lost or wasted, according to new analysis. This situation poses a serious challenge to the world’s ability to reduce hunger and meet the food needs of the rapidly-expanding global population.

Released on World Environment Day (WED), which this year carries the theme “Think.Eat.Save - Reduce Your Foodprint,” the new working paper, Reducing Food Loss and Waste, shows that more than half of the food lost and wasted in Europe, the United States, Canada, and Australia occurs close to the fork—at the consumption stage. By contrast, in developing countries, about two-thirds of the food lost and wasted occurs close to the farm—after harvest and storage.

“Beyond all the environmental benefits, reducing food loss and waste will save money for people and companies,” said Craig Hanson, Director of WRI’s People & Ecosystems Program and a co-author of the study. “The world needs urgent solutions to feed its growing population and reducing loss and waste is a critical piece toward a more sustainable food future.”

According to the study, which was released today in Mongolia, the global host of WED 2013, the world will need about 60 percent more food calories in 2050 compared to 2006 if global demand continues on its current trajectory. Halving current rates of food loss and waste, say the authors, would reduce this gap by a fifth. This would also result in major savings in water use, energy, pesticides and fertilizers, and would be a boost for global food security.

“It is an extraordinary fact that in the 21st century, close to 25 per cent of all the calories linked with growing and producing food are lost or wasted between the farm and the fork—food that could feed the hungry, food that has required energy, water and soils in a world of increasing natural resource scarcities and environmental concerns including climate change,” said Achim Steiner, UN Under-Secretary General and UNEP Executive Director.

“Yet within the challenge of food are the seeds of a more cooperative and sustainable future—in short, it is an issue that unites everyone today and generations to come. The menu of case studies and recommendations in this study provide national and community-led solutions that ally smart policies with traditional knowledge, modern science and common sense,” he added.

“Everyone—from farmers and food companies to retailers, shipping lines, packagers, hotels, restaurants and households—has a role to play, and, in doing so, can contribute to maximizing the opportunities of the Millennium Development Goals, eradicating inequalities in rich and poor countries alike, and laying the foundation of a more environmentally sustainable pathway for billions of people,” said Mr. Steiner.

From community food banks in Australia to the use of metal grain silos by farmers in Afghanistan, the WRI and UNEP study showcases simple, low-cost solutions for reducing food loss and waste that are already delivering significant environmental and economic benefits to communities around the globe. Replicating and expanding these initiatives could significantly reduce the 1.3 billion tons of food lost or discarded worldwide each year, and make major improvements to global resource efficiency.

The report shows, for example, that water used to produce lost or wasted food globally each year could fill 70 million Olympic-sized swimming pools, while the amount of cropland used to produce wasted food is equivalent to the size of Mexico. Some 28 million tons of fertilizer are used annually to grow this lost and wasted food. The inefficient use of fertilizers is linked to the growth of "dead" coastal zones around the globe and to climate change.

Separate analysis coordinated by the FAO to be published soon indicates that if food loss and waste were a country, it would be the third highest emitter of greenhouse gases after the United States and China.

Case studies highlighted in the report include:

United States: To reduce portion sizes and therefore the amount of food thrown away each day in their cafeterias, some universities have discontinued the use of trays and introduced “pay by weight” schemes and other incentives. One university found that after going “trayless,” it discarded almost 13 metric tons less food than in previous years, and conserved over 100,000 litres of water annually. Financial savings amounted to US $79,000 per year.

Afghanistan: Insufficient storage can be a major source of food loss for farmers in developing countries, where structures often do not keep produce in airtight conditions. A FAO project in Afghanistan provided metal silos to 18,000 rural households. Recipients of the silos soon reported higher net incomes due to lower food losses, which decreased from 15 to 20 percent to 1 to 2 percent per year.

Sri Lanka: Introducing studier plastic crates to replace bags or sacks previously used to transport food reduced vegetable losses by weight from 30 percent to 5 percent. A similar project in the Philippines using plastic crates increased the value of a kilogram of fruit and vegetables by 16 per cent.

Australia: The non-profit organization SecondBite collects food from farmers, retailers, and other donors and distributes it to community groups in need. Last year, SecondBite reused and redirected 3,000 tons of fresh food that would otherwise have been discarded.

Nigeria: The “zeer” evaporative cooler system, developed by a teacher in Nigeria, can preserve fruit and vegetables without refrigeration. The system costs less than US $2.00 and can hold up to 12 kilograms of produce. Tomatoes and guavas, which would last around two days without storage, last up to 20 days in a zeer.

The paper contains a number of more general recommendations, including:

In addition, UNEP is developing a food waste prevention and reduction tool kit with FAO and WRAP (Waste and Resources Action Programme), together with experts, supermarkets, governments and other partners. The initiative will support governments, companies and cities to better assess their own levels of food waste, pinpoint areas in their businesses and communities where food is being needlessly wasted, and devise strategies to reduce this waste. The tool kit is expected to be available for widespread deployment before the end of 2013, and aims to underpin a transition to a less wasteful world.

World Environment Day
From the traditional knowledge of indigenous communities in remote rural areas, to major conferences in the fast-expanding capital Ulaanbaatar, issues around food security and sustainability are featured high on the agenda for World Environment Day (on 5 June) in the global host country Mongolia.

Events with the country’s ancient herding communities highlighted age-old techniques that have been used for centuries to preserve food and avoid waste. In the past, Mongolia’s traditional horsemen frequently relied on “borts” to sustain them over long journeys. The foodstuff consists of concentrated beef equal to the protein of an entire cow condensed and ground down to the size of a plate. This method of food preservation could produce a meal equivalent to several steaks when the protein was shaved into hot water to make soup.

In the run-up to World Environment Day, internet users have been submitting a host of traditional food-saving ideas and traditions via UNEP’s Facebook page. These include chuño from South America, which involves exposing potatoes to the freezing night air and hot daytime sun for five days, before trampling them to squeeze out any moisture. Chuño can last for several months, or even years.

Beyond Mongolia, thousands of people around the world are taking part in World Environment Day activities to highlight the need to consume and produce food more sustainably.

In Bosnia and Herzegovina, the capital city Sarajevo will host environmental experts in a series of events focused on engaging citizens on food waste and its environmental impact.

In China, Shanghai’s International Student Conference on Environment and Sustainability (ISCES) hundreds of students will debate and discuss the theme of “Food, Health and Sustainable Development.”

UNEP’s Geneva-based Regional Office for Europe is running a competition called “Love Your Leftovers,” where people can submit a recipe that they use to clean out the fridge. The competition will be judged by a top chef at the famous Cafe de la Paix in central Paris.

About World Environment Day (WED)
WED aims to be the biggest and most widely celebrated global day for positive environmental action. WED activities take place year round but climax on 5 June. WED celebrations began in 1972 and have grown to become the one of the main vehicles through which the UN stimulates worldwide awareness of the environment and encourages political attention and action. The WED 2013 theme is in support on the Think.Eat.Save campaign. For more information on activities in the host country Mongolia, and on hundreds of other global events, visit the WED site at: www.unep.org/wed/

About the Think.Eat.Save. Reduce Your Foodprint campaign
The campaign harnesses the expertise of organizations such as FAO, WRAP (Waste and Resources Action Programme), Feeding the 5,000 and other partners, including national governments, who have considerable experience targeting and changing wasteful practices. It aims to accelerate action and provide a global vision and information-sharing portal for the many initiatives currently underway around the world that aim to reduce food waste and food loss. Visit: www.thinkeatsave.org More examples of traditional techniques to preserve food and reduce waste are available here.

Notes to Editors: The new working paper Reducing Food Loss and Waste, is available at: www.wri.org and www.unep.org.

Read a blog post on the new paper, here.