Home > STATEMENT: Climate Talks Wrap Up with a Deal in Doha

STATEMENT: Climate Talks Wrap Up with a Deal in Doha 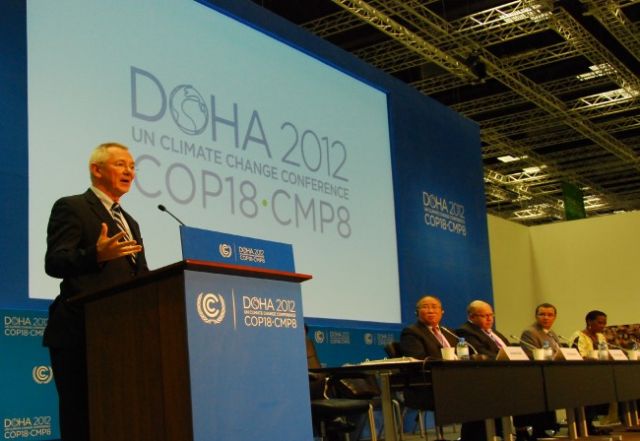 The climate talks (COP18) wrapped up today in Doha, Qatar, with package of decisions, including an agreement to move forward an international climate agreement by 2015.

“It wasn’t pretty, but Doha delivered just enough to keep the process moving. By resolving the key issues, all countries are now on a single track to enter into a new international climate agreement by 2015.

“Yet, much more remains to be done. Over the coming year, negotiators need to step up their intensity and hammer out a plan that will lead to an agreement that is ambitious and fair for all. Moreover, they need to raise their level of ambition in the near term, even before a new agreement kicks in.

“Getting on the right track will take a greater commitment and sense of urgency than we saw in Doha. There were a couple of bright spots, including the EU countries that stepped up with important financial pledges. But the United Nations is primarily a reflection of the political will of its members-- and right now we’re lacking leadership on climate from most world powers.

“Following President Obama’s re-election and the devastation of Hurricane Sandy, many people were watching to see if the United States would shift its strategy. The US made some gestures, but it didn't significantly change course. All eyes will be on the administration to see what further action it takes to lower emissions at home. President Obama’s legacy-- like all world leaders-- will in part be measured by his response to the climate crisis.

“The stakes are high. Whether it’s events like Typhoon Bopha and Hurricane Sandy, or record-breaking droughts and rapidly rising seas, the dangers of a warming planet cannot be ignored.

“The door is now open. It’s up to all countries to step through and get on course to a strong and fair climate agreement.”