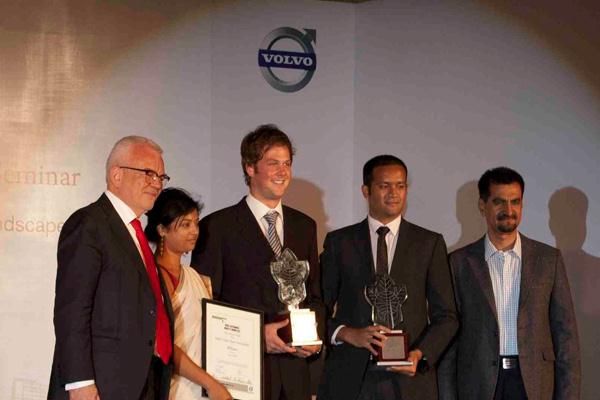 The Volvo Bus Corporation announced the winners of the 2012 Volvo Sustainable Mobility Award, naming EMBARQ India and the Indian Urban Space Foundation as joint recipients of the prize at the Sweden-India Nobel Week Seminar, at the Leela Palace in Bangalore, India, yesterday.

The award was handed out by M.K. Shankarlinge Gowda, Principal Secretary (Transport), Government of Karnataka. The award, now in its second edition, recognizes progressive and practical action to promote sustainable solutions in urban mobility. Indian Urban Space Foundation was awarded for its Tender SURE project, while EMBARQ India won for its ongoing project, in partnership with the Bangalore Metropolitan Transport Corporation (BMTC), which aims to improve bus services along the Hosur Road corridor. This is a pilot project for improving the efficiency and quality of public transport services along major arterial roads in Bangalore.

“We’re honored to receive this award. It is encouraging to see our work being recognized by others in the urban transport community,” said Madhav Pai, Director, EMBARQ India.

To counter the negative externalities of urban growth and improve the quality and quantity of public transport in Bangalore, EMBARQ India recommended moving BMTC’s bus services from a ‘Direct Services Model’ to a ‘Connective System Model,’ whereby bus routes would be organized in a more efficient ‘trunk-and-feeder’ system.

“The benefit of this system over the Direct Services Model is that it relies on direction-oriented, rather than destination-oriented travel, is easier to scale up as transport demand increases, allows users to select the most efficient trip patterns, and helps system planners to accurately match demand to supply,” said Ashwin Prabhu, a transport planner at EMBARQ India, who has worked on this project with BMTC.

BMTC already has an extensive bus-based public transport system with an impressive track record of growth over the past decade, currently serving nearly 5 million passengers daily. However, the pressure on Bangalore’s urban transport system is expected to grow significantly in the coming years, with the growing population and other effects of increased urbanization. In the absence of high quality, efficient, and affordable public transport, the majority of the growth in transport demand will be served by private motor vehicles, such as cars and two-wheelers.

EMBARQ India, which is a member of EMBARQ--WRI’s center for sustainable transport--hopes to use this pilot project on Hosur Road as a model for other arterials in the city, as well as other cities in the country.

“Mainstreaming the notion of the integrated systems model in public transport planning in India will be the key to achieving a future in which public transport captures the majority of travel demand in urban India, making our cities better places to live, work, and play,” said Pai.