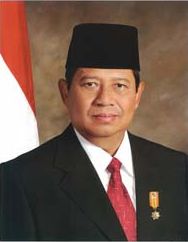 Three leading global environmental and conservation organizations are honoring Indonesia’s President H.E. Susilo Bambang Yudhoyono with the first-ever “Valuing Nature Award” for his leadership in recognizing the importance of natural resources and working to conserve them. Indonesia, with an area of nearly 2 million square kilometers (772,204 square miles) and over 2 hundred million people, is one of the most important countries when it comes to sustainability, particularly in relation to its globally important biodiversity, forest and marine resources. The award will be presented by the Nature Conservancy, World Resources Institute and WWF at a dinner in New York City, coinciding with the United Nations General Assembly meetings.

President Yudhoyono is specifically being recognized for his leadership in establishing the multilateral Coral Triangle Initiative, which will sustain extraordinary marine and coastal resources in six countries: Indonesia, Malaysia, Papua New Guinea, Philippines, Solomon Islands and Timor-Leste. This region is one of the most biologically diverse areas, home to more than 75 percent of all known coral species and more than 37 percent of coral reef fish. In total, the coral reefs, mangroves, and associated natural habitats are valued at US $2.3 billion. These resources provide jobs, food, and business opportunities for millions of people in the region. Catalyzed by President Yudhoyono, the Coral Triangle Initiative brings together an unprecedented partnership of governments with public sector, private sector, NGOs and others, and offers a model for connecting marine conservation to the health and security of local communities.

Following are statements from representatives of the three organizations:

“Some leaders prioritize economic growth, others social equity, and yet others environmental protection. But Indonesia, under President Yudhoyono, is showing that smart environmental policies, smart growth policies, and smart social policies can be mutually reinforcing,” said Andrew Steer, President, World Resources Institute. “The world is watching and admiring this quest for a triple win.”

“There is an urgent need to scale up the pace and collaboration in marine conservation because the challenge simply cannot be conquered by one nation alone,” said Glenn Prickett, Chief External Affairs Officer for The Nature Conservancy. “President Yudhoyono understands this, and recognizes the extraordinary marine life abundance and diversity in the Coral Triangle region. His personal call for action to address threats in this globally important region led to the start of the Coral Triangle Initiative. Today, CTI has given the world a tremendous opportunity to value nature and realize the tangible benefits of it by managing the marine resources in a way that builds our natural capital.”

“The Coral Triangle Initiative has been a powerful catalyst for positive change in a region rich in biological diversity, but that desperately needs better protection for its precious and fragile marine and coastal resources,” said Catherine Plume, Managing Director of World Wildlife Fund’s Coral Triangle Program. “While important actions are underway, we hope that all stakeholders involved in this important initiative will redouble their sustainability efforts in the region.”

The World Resources Institute (WRI) is a global environmental and development think tank that goes beyond research to put ideas into action. We work with governments, companies, and civil society to build solutions to urgent environmental challenges. WRI’s transformative ideas protect the earth and promote development because sustainability is essential to meeting human needs and fulfilling human aspirations in the future. www.wri.org.

WWF is the world’s leading conservation organization, working in 100 countries for nearly half a century. With the support of almost 5 million members worldwide, WWF is dedicated to delivering science-based solutions to preserve the diversity and abundance of life on Earth, halt the degradation of the environment and combat climate change. Visit www.worldwildlife.org to learn more.