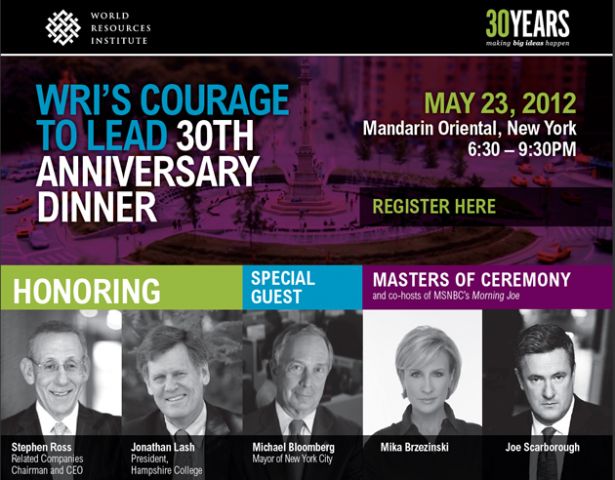 The World Resources Institute is celebrating its 30th anniversary with a gala dinner featuring government, business, media and environmental leaders on Wednesday, May 23, 2012, at the Mandarin Oriental in New York City.

During the “Courage to Lead” dinner, WRI will recognize Mayor and philanthropist Michael Bloomberg for his contributions to advance sustainable solutions in New York City and internationally.

WRI will honor Stephen Ross, Chairman and CEO of Related Corporation and owner of the Miami Dolphins, and Jonathan Lash, WRI’s former President and current President of Hampshire College, for their commitment to the environment and sustainable development.

Mika Brzezinski and Joe Scarborough from MSNBC’s “Morning Joe” will be the masters of ceremony. Additional speakers include Michael Beschloss, presidential historian and frequent TV commentator; Andrew Steer, incoming President of WRI and current Special Envoy for Climate Change at the World Bank; and James Harmon, Chairman of Caravel Management LLC and Chairman of WRI’s Board of Directors.

Dan Doctoroff, CEO & President of Bloomberg L.P. and a member of WRI’s Board of Directors, will be the dinner chair.

WHAT:
Interviews and photo opportunities before WRI’s “Courage to Lead” dinner

Note: The photo and interviews opportunities will be available before the dinner – the dinner itself will be closed to media.