Home > STATEMENT: A Climate Deal Comes Together in Durban

STATEMENT: A Climate Deal Comes Together in Durban 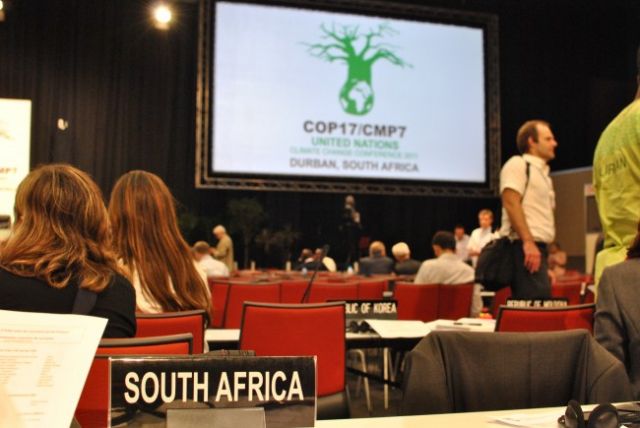 As the climate talks concluded today, Parties agreed to move forward with a “Durban Package” that includes a pathway forward on a legally-binding instrument for all countries, an agreement on a second commitment for the Kyoto Protocol, and a set of decisions to implement the Cancun Agreements, including the Green Climate Fund.

“A roller-coaster two weeks ended with a major climate deal in Durban. Significantly, countries will now negotiate a legally-binding agreement covering both developed and developing countries by 2015, which would cover post-2020 emissions targets and actions. However, there was little progress to close the significant gap between countries’ emissions levels and what’s needed to stay within two degrees Celsius of warming.

“Durban represented a fork in the road between a legally-binding system and a voluntary one. In the end, the European Union, the United States, China, India, along with vulnerable countries in Africa and small islands opted for a path toward an international climate regime.

“The European Union, in particular, came into the conference with a willingness to enter into a second commitment period under the Kyoto Protocol. Working closely with allies in the least-developed countries and small island nations, the EU injected ambition into the talks. The result is a clear pathway for countries to enter the second commitment period of the Kyoto Protocol.

“Countries also pushed ahead with the implementation of the Cancun Agreements. Most notably, they agreed to make the Green Climate Fund operational, and set up a work plan to mobilize significant climate funds from both private and public sources. Currently, however, the funding level is insufficient to meet the commitments. Though details remain to be sorted out, there was also progress on other core issues, such as adaptation, REDD+, and technology.

“On the other hand, the lack of a common accounting framework for developed countries is a significant step backward. This will make it very difficult to know how countries targets compare against the 2 degrees Celsius goal.