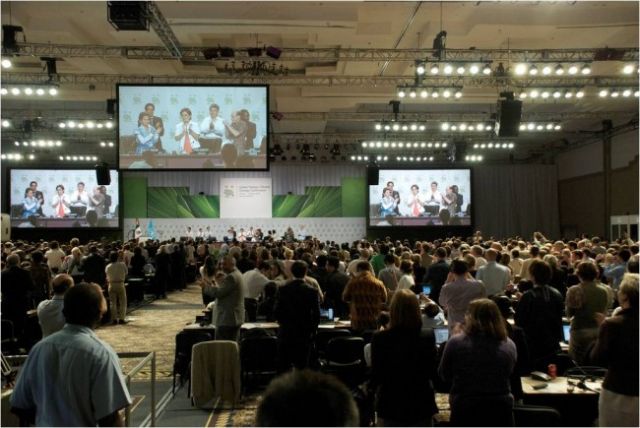 Paper offers options to scale up climate action globally in Durban, Rio and beyond

Studies show that the world’s aggregate level of effort on climate change mitigation is not in line with the science and existing country commitments are insufficient to adequately address climate change. A new paper published by the World Resources Institute (WRI) and the United Nations Environment Programme (UNEP), with the support of the Government of Ireland, entitled Building the Climate Change Regime: Survey and Analysis of Approaches, reviews more than 130 proposals put forward by governments, non-governmental organizations (NGOs), and academics to design a climate regime capable of delivering adequate mitigation action.

The findings are crucial and timely because in less than a month countries will gather in Durban, South Africa, to try to reach agreement on an ambitious programme for tackling climate change. The report shows that there are far more options to counter climate change than acknowledged or promoted.

“The analysis provided in this new report offers many options that can happen either in the formal negotiations or as complementary measures elsewhere,” said Achim Steiner, UN Under-Secretary-General and Executive Director of UNEP. “Options that can assist the more than 190 United Nations member states move quickly to harvest the opportunities of a transition to a climate resilient, low carbon, resource efficient Green Economy,” he added.

Building the Climate Change Regime clearly shows that there is a path forward for climate negotiators and offers a menu of options to national governments to mitigate climate change, both within and outside the United Nations Framework Convention on Climate Change (UNFCCC). The report, which suggests that there are a number of pathways toward the desired level of ambition, also highlights the need to mobilize a range of public and private sector actors at the international, national and sub-national levels, who can contribute to climate governance, emission reductions, and adaptation investment.

“We know that more needs to be done globally to reach our long-term climate objectives. The reality is that there is no shortage of options and these proposals show the wealth of pathways available,” said Manish Bapna, Interim President of WRI. “At the upcoming climate meeting in Durban, countries have the opportunity to turn these ideas into action and start to bridge the ambition gap needed to truly have an impact.”

“The publication of the paper is very timely. It presents real options for addressing difficult political issues that still remain to be resolved in the international negotiations, not least in relation to the legal form of a future international agreement, the timeframe for agreement, and the need to increase the level of ambition on mitigation action,” said Phil Hogan, Minister for the Environment, Community and Local Government, Ireland.

The report breaks down proposals into five key issues that have been major points of debate:

An illustrative finding in the report is that it is possible to build upon existing UNFCCC processes to strengthen the climate regime and raise the overall level of ambition. For example, a review under the UNFCCC of aggregate progress towards the 2 degree goal could facilitate an increase in the ambition of countries’ commitments. The UNFCCC can also provide a strengthened institutional framework, possibly binding in nature, to anchor, coordinate and review the commitments of countries.

“Many institutions and actors can play a part in the broader climate regime,” said Remi Moncel, Associate at WRI and one of the authors of the paper. “The proposals reviewed show that we can take an all-hands-on-deck approach where the UNFCCC and other actors work in tandem based on their respective strengths. We need to move the conversation from ‘we are not doing enough’ to ‘how can we do more collectively’, and these findings take us one step closer.”

Whilst a number of studies have demonstrated that the level of climate mitigation pledged to date is insufficient to limit temperature increases to 2 degrees C, this paper clearly demonstrates that there are a range of good ideas and options available that could help correct the course and move toward a safer and more stable climate.

The paper is being launched at events in Washington, DC, and Dublin featuring key experts from WRI, UNEP, the Government of Ireland, and partners. To read the full report, visit: /publication/building-the-climate-change-regime.

About UNEP
The United Nations Environment Programme, established in 1972, is the leading authority on the environment within the United Nations system. Its mission is to provide leadership and encourage partnership in caring for the environment by inspiring, informing, and enabling nations and peoples to improve their quality of life without compromising that of future generations. To accomplish this, UNEP works with a wide range of partners, including United Nations entities, international organizations, national governments, non-governmental organizations, the private sector and civil society. www.unep.org