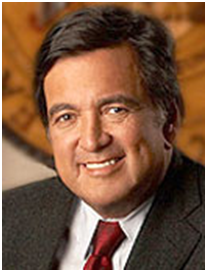 Former New Mexico Governor Bill Richardson was elected to the Board of Directors of the World Resources Institute, announced its president Jonathan Lash.

“Gov. Richardson brings decades of experience as a public official, diplomat and business leader, and has consistently displayed an enthusiasm and commitment to environmental issues that will be invaluable in advancing WRI’s goals,” said Lash. “We are grateful to Gov. Richardson for contributing his energy and environmental expertise, along with his international experience to our organization. We look forward to the vision and leadership that he will provide.”

Richardson has held numerous positions in public service, including serving as a member of the U.S. House of Representatives (1983–97), as a member of President Clinton's cabinet (1997–2001), and as governor of New Mexico (2003–2010). In the Clinton administration, Richardson served as the secretary of energy from 1998 to 2001, where he advanced the development of wind, solar and other renewable energy production, improved the disposal of nuclear waste, and oversaw the return of 90,000 acres of land to Native American tribes, one of the largest voluntary returns of Indian lands ever.

“I am honored to join WRI. They are an outstanding organization that has made a huge difference in protecting the environment and promoting sustainable development throughout the world,” said Gov. Richardson.

Richardson was elected governor of New Mexico in 2002, and was re-elected in 2006. In 2008, Richardson’s presidential campaign focused on many issues that he had faced throughout his political career— the economy, energy and the environment, foreign policy, education, and immigration reform. Richardson also has vast international experience having served as a special envoy on numerous international missions, including to North Korea, Iraq, Sudan and Cuba.

Richardson was born in Pasadena, Calif., and lived in Mexico City until age 13. He attended Tufts University, earning bachelor's degrees in political science and French in 1970, and a master's degree from the Fletcher School of Law and Diplomacy the following year.