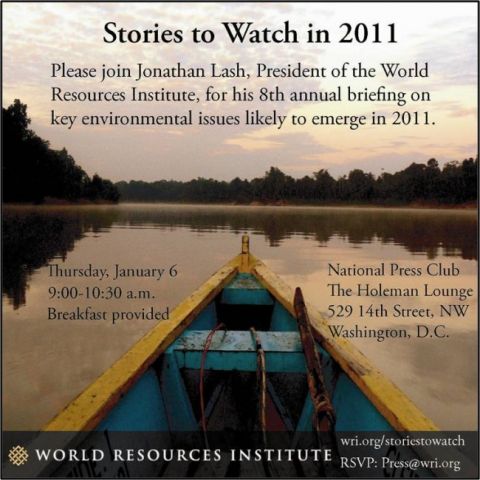 NOTE: We will be live-blogging this event at: www.wri.org/storiestowatch. Use the tag #STW11 to join the conversation.

Lash will explore issues such as how far will EPA go in reducing greenhouse gas emissions? What energy choices will the United States make without a cohesive federal policy? What will be the impact of increasing tensions among food, agriculture, and water? Which countries will emerge on the environmental scene in 2011? With the world’s population increasing, how will this affect transportation options? What’s next for global action on climate change following the Cancun Agreements?

Continental breakfast will be served.

WHO
Jonathan Lash has a strong record of working closely with CEOs of major corporations, members of Congress and the White House, and leaders from countries worldwide. He is a unique and trusted voice from the environmental community, and journalists can benefit from his insights on issues ranging from climate change and business action to water and forests.

Rolling Stone has called Lash a “climate warrior and hero.” He was named one of the world’s Top 100 Most Influential People in Finance by Treasury & Risk Management magazine, and was the only leader of a non-profit environmental organization to make the list.

A former co-chair of President Clinton’s Council on Sustainable Development and secretary of natural resources in Vermont, Lash serves on the advisory board of Generation Investment Management, the GE Ecomagination Advisory Council, and the Blue Ribbon Panel on America’s Nuclear Future.