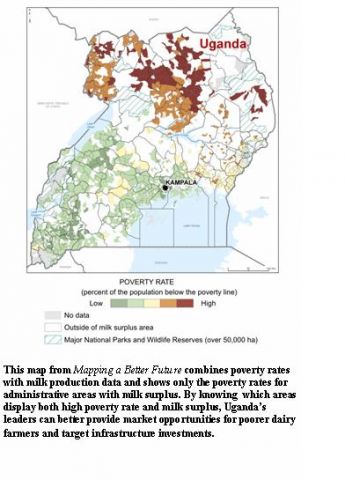 The World Resources Institute (WRI) is unveiling today a new set of maps illustrating possible market opportunities for Uganda’s livestock farmers living in poverty. The maps compare for the first time 2005 poverty levels with livestock data from the 2002 population and housing census and the 2008 national livestock census.

“Seven out of ten households in Uganda own livestock, making it an integral part of Ugandans’ diet, culture, and income,” said Hon. Hope R. Mwesigye, Ugandan Minister of Agriculture, Animal Industry and Fisheries and co-author of Mapping a Better Future: Spatial Analysis and Pro-Poor Livestock Strategies in Uganda. “The maps are meant to guide the government’s future investments to reduce poverty while strengthening the livestock sector."

While Uganda’s total agricultural output has declined, livestock figures have increased dramatically in the last decade due to strong domestic and regional demand for livestock products, according to the report.

“Increased livestock production carries both economic opportunities for Ugandans and greater risk for transmission of animal diseases,” said Nicholas Kauta, Commissioner of Livestock Health and Entomology at the Ministry of Agriculture, Animal Industry and Fisheries. “The maps included in this report will help Uganda’s leaders understand market opportunities and, at the same time, target at-risk areas for disease outbreaks with appropriate health intervention plans.”

For instance, maps showing milk surplus and deficit areas can highlight geographic differences in market opportunities for poor dairy farmers. According to the maps in the report, about 3.5 million people live in subcounties identified as producing more milk than their residents consume and approximately 0.8 million poor people live in areas where the demand for milk is greater than supply. This information can help policymakers, dairy researchers and development agencies gauge market opportunities and invest in infrastructure where it is needed the most.

“By combining social data and livestock information and analyzing the map overlays, decision-makers from different sectors can work together to identify solutions to complex problems facing communities such as diseases that affect both people and livestock,” said Norbert Henninger, senior associate at WRI and co-author of the report.

John B. Male-Mukasa, executive director of the Uganda Bureau of Statistics, said, “Uganda’s government acknowledges the importance of livestock to the nation’s economic development and food security, and as part of its 2010-2015 National Development Plan, it plans to invest in improved livestock breeds, water infrastructure, and livestock land management. The maps in this report will be useful in identifying the regions where investment is needed most dearly.”

Mapping a Better Future is the third installment in a series of publications using maps and spatial analysis to reduce poverty in Uganda, following two previous reports which targeted wetlands and water and sanitation.