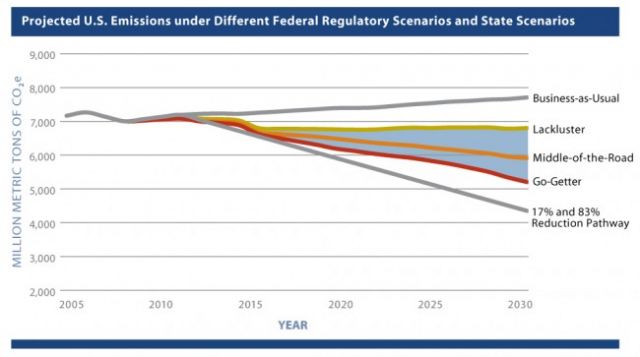 As the Senate struggles with climate and energy legislation and Congress contemplates limiting the U.S. Environmental Protection Agency’s authority, a new analysis brings clarity to the importance of regulatory tools in any approach. This analysis is particularly important in light of President Obama’s commitment to the world in Copenhagen to reduce U.S. emissions in the range of 17 percent below 2005 levels by 2020.

In a first-of-its-kind analysis, the World Resources Institute (WRI) calculated the potential greenhouse gas reductions that could be achieved by federal agencies under a range of existing authorities and by states through announced plans. The analysis concludes that if they act aggressively, and if U.S. EPA’s authority is preserved, the federal government and states can put the United States on a near-term course to considerably reduce greenhouse gas emissions, but longer-term reductions remain uncertain.

“The study highlights both the need to pass climate legislation and the importance of preserving existing authorities,” said Jonathan Lash, president of WRI. “The study’s findings make it very clear that current efforts by Congress to curb U.S. EPA authority will undermine U.S. competitiveness in a clean energy world economy, block control of dangerous pollutants, and put the U.S. at odds with its allies.”

“Robust federal regulatory action and strong state leadership, combined with significant political will, are the needed ingredients to achieve significant reductions using existing authorities. The study also highlights that cap-and-trade legislation is needed to drive longer-term reductions and provide investors with the certainty they will need to transform the U.S. economy and add jobs.” said Lash. “Particularly in a scenario of less-than- comprehensive cap, regulatory tools are absolutely essential to drive the U.S. to a low-carbon economy.”

The analysis finds that if the federal government and states move aggressively through 2016, agencies—chief among them the U.S. EPA and the Departments of Transportation and Energy—could successfully use existing authorities to put the country on a trajectory to meet the Obama Administration’s reduction target “in the range of” 17 percent below 2005 levels by 2020. This is the most aggressive scenario that WRI analyzed. After 2016, estimated reductions diverge from the 17 percent reduction path and fall short of the Administration’s target, suggesting additional tools, such as a carbon price, to reduce emissions will be essential. Importantly, longer-term reductions are much less certain under a regulatory path.

“Without federal climate legislation that locks in longer-term economy-wide reductions, the longer-term picture is unclear,” said Nicholas Bianco, a senior associate at WRI and a co-author of the study. “A long-term declining cap on emissions, creating a robust carbon price, is still very much needed.”

The report analyzes three scenarios, each representing a level of technical feasibility and corresponding regulatory ambition by federal agencies and state governments—the “Lackluster” scenario, a “Middle-of-the-Road” scenario and a “Go-Getter” scenario. The three scenarios outline the opportunities in each sector to reduce emissions and the reality that there are a variety of factors at stake which will determine how robust action will be.