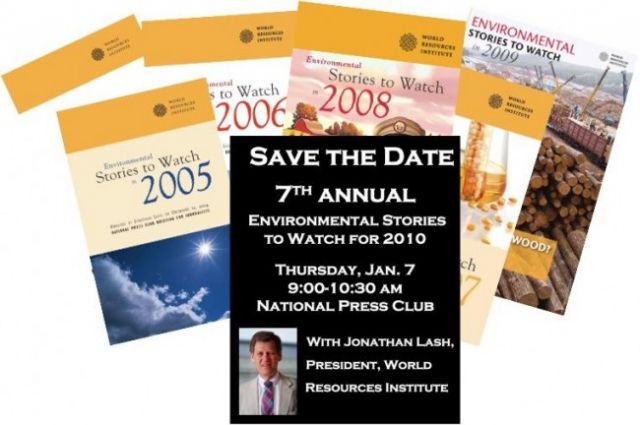 WHAT: For the seventh straight year, Jonathan Lash, president of the World Resources Institute, will hold a briefing for journalists to preview key environmental issues to watch this year.

WHY: Will the Copenhagen Accord be implemented and, if so, how? With the help of the “London Challenge” and other initiatives, how much is the long-neglected potential for forest restoration beginning to change? Are SEC laws relating to climate change likely to be enforced due to the financial crisis? What options do the EPA and Congress have for reducing CO2, and who will provide federal leadership? What environmental and political factors will come into play as China focuses on implementing its 40 percent to 45 percent target to reduce carbon intensity? What progress is Congress making on a bill to limit Chesapeake Bay pollution?

Jonathan Lash has a strong record of working closely with CEOs of major corporations, members of Congress and the White House, and leaders from countries worldwide. He is a unique and trusted voice from the environmental NGO community for these leaders, and journalists can benefit from his insight for their future stories on issues ranging from climate and business action to water and forests.

Rolling Stone called him a “climate warrior and hero,” recognizing him for bridging the divide between industry and environmental leaders. He was named one of the world’s Top 100 Most Influential People in Finance by Treasury & Risk Management magazine, and was the only leader of a non-profit environmental organization to make the list.

A former co-chair of President Clinton’s Council on Sustainable Development and secretary of natural resources in Vermont, Lash currently serves on the advisory board of Generation Investment Management, on the GE Ecomagination Advisory Council, and as a leader of the United States Climate Action Partnership.