NEWS RELEASE: Suite of Policies Could Clean Up Polluted Waters 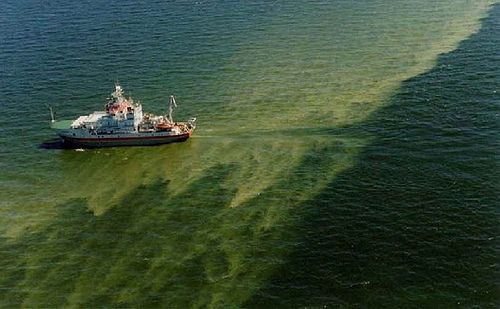 Lawmakers should consider a suite of policies to reduce harmful algal blooms and dead zones caused by eutrophication--the over-enrichment of nitrogen and phosphorous in freshwater and coastal ecosystems.

“Eutrophication is like climate change,” said Mindy Selman, lead author of a new report released by the World Resources Institute (WRI). “It’s caused by human activity, there is no single solution and addressing it will require a number of approaches.”

Eutrophication: Policies, Actions, and Strategies to Address Nutrient Pollution, the last report in a three-part series, identifies and highlights local, state and regional tactics to address nutrient and phosphorus pollution. Findings from the report suggest that lawmakers maximize outcomes by focusing on policies with numerous environmental benefits.

For example, while regulating nutrient discharge from wastewater treatment plants helps mitigate eutrophication, WRI’s research reveals that this approach has few environmental co-benefits, and could even result in significant environmental tradeoffs.

In addition, many of the technologies to remove nutrients from wastewater use a significant amount of energy. Depending on the energy source, this could lead to additional emissions of nitrous oxide (NOx), a pollutant that not only contributes to eutrophication when re-deposited on land and in water, but also contributes to smog and acid rain. Currently, atmospheric deposition accounts for 30 percent of the nitrogen pollution found in the Chesapeake Bay.

Some of the nitrogen that is scrubbed from wastewater might also be released as nitrous oxide (N2O) gas, which is a greenhouse gas with a warming potential that is nearly 300 times greater than that of carbon dioxide (CO2).

“Because there are so many pathways, sources, and drivers of nutrient pollution, the policies that address eutrophication cannot be limited to traditional environmental regulations,” said Selman.

Another approach which promotes considerable environmental synergies is agricultural policy that provides incentives to farmers who reduce nutrient pollution. For instance, growing vegetative buffer strips on farms not only prevents organic and chemical fertilizer from running off into the water, but can also improve wildlife habitats, reduce soil erosion, and sequester carbon.

Supporting research and development of new technologies should also be considered by politicians, WRI’s report concludes. In Florida and California, algal turf scrubber systems are being used to remove nitrogen and phosphorous in freshwater. The algae can then be harvested and used for cattle feed or biofuel production.

“Nearly 500 coastal areas around the country already suffer from dead zones and without decisive action by policymakers the number is expected to rise in the foreseeable future,” said Selman.”Lawmakers should carefully consider policies that maximize environmental returns.”

This report follows Eutrophication: Sources and Drivers of Nutrient Pollution. The first report, Eutrophication and Hypoxia in coastal Areas, is a survey of where coastal eutrophication is occurring worldwide.