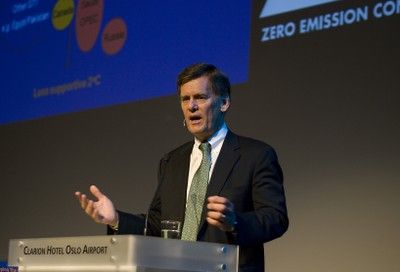 China Prime Minister Wen Jiabao today announced his country's plan to cut carbon-emissions intensity 40 to 45 percent by 2020 compared to 2005 levels. The details will be presented at the United Nations climate conference in Copenhagen, Denmark early next month.

"As we head towards Copenhagen, the world's two largest emitters have stepped up to the plate at the highest political level," said Jonathan Lash, president of the World Resources Institute. "This shows that international engagement on climate change can produce real results."

With yesterday's announcement by President Barack Obama that he will call for a U.S. emission-reduction target of 17 percent below 2005 levels in 2020, nearly all industrialized countries and major emerging economies have now announced emissions goals or major action plans on climate.

"The timing of these announcements underscores how important these countries are to each other. To reach the levels of commitment of Mexico, Brazil, and many other countries, and those necessary to meet global temperature targets, China and the U.S. will eventually need to go further in their pledges." Lash said. "But the road to an international agreement is now open more than ever."

Carbon intensity is the emissions produced per unit of economic output, and China's fast-growing economy means that absolute emissions in China will rise during this period. However, China's goal is in line with what the International Energy Agency thinks is needed to keep global greenhouse gas (GHG) concentrations on a path that gives the world a chance of keeping global warming under 2 degrees Celsius, averting the worst impacts of climate change.

WRI experts calculate that, under President Obama’s goal of a 17 percent reduction in GHG emissions, the U.S. would see slightly more than a 40 percent improvement in carbon intensity, similar to China’s ambitions. These estimates are slightly imprecise because our calculations are for only energy-related carbon-dioxide emissions. They are also based on assumptions about GDP growth. Nonetheless, they suggest that both countries are committed to ambitious goals.

To meet the target, China appears committed to implement ambitious energy-efficiency and fuel-switching policies. Since most renewable and alternate non-fossil energy is in the power sector, this would mean a much higher percentage of total electricity generation needs to come from non-fossil fuel sources, including renewables and nuclear energy.

WRI will send 30 people to the Copenhagen conference. For details on how to reach them, please contact Paul Mackie, WRI director of media relations, at +1(202) 729-7684 or pmackie@wri.org. For more information on China's announcement, go here, and for more on the upcoming climate talks, visit the Countdown to Copenhagen page on WRI’s Web site.