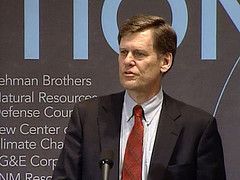 WHAT: For the sixth straight year, World Resources Institute President Jonathan Lash will hold a briefing to preview which key environmental issues to watch in the year ahead.