So far, 56 countries (including 28 member states of the European Union) have submitted their intended nationally determined contributions (INDCs) to the United Nations Framework Convention on Climate Change (UNFCCC). Reflecting the nationally determined nature of these climate contributions, they vary significantly in form, scope and coverage. Yet a key question for all of them is: Have they provided information about whether they are fair and ambitious?

The Lima Call to Climate Action, the COP decision adopted last year, suggested a list of information that countries can include in INDCs to ensure transparency and understanding, including “how the Party considers that its intended nationally determined contribution is fair and ambitious, in light of its national circumstances, and how it contributes towards achieving the objective of the Convention as set out in its Article 2.”

Undertaking fair and ambitious climate action is essential to setting the foundation for a transformation to a low-carbon and climate-resilient economy. Transparency about the fairness and ambition of climate contributions can help create an open dialogue and build the necessary trust between all countries to ensure an effective and binding outcome at COP21 in Paris later this year.

Transparency about the criteria used to inform a contribution can also help in setting benchmarks to clarify how key principles – such as equity and common but differentiated responsibilities and respective capabilities – will be put into operation in the new agreement.

So how are countries approaching this task? What factors relevant to fairness and ambition are they considering, and what are they missing? Let’s take a look.

What Has Been Communicated So Far About Fairness and Ambition?

Some common threads are emerging, and some seeds for future consideration are beginning to appear, including around issues like: 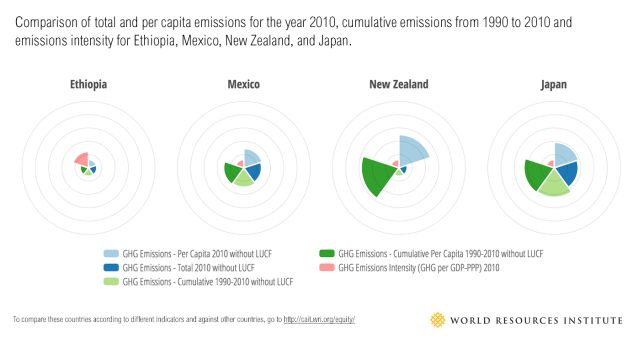 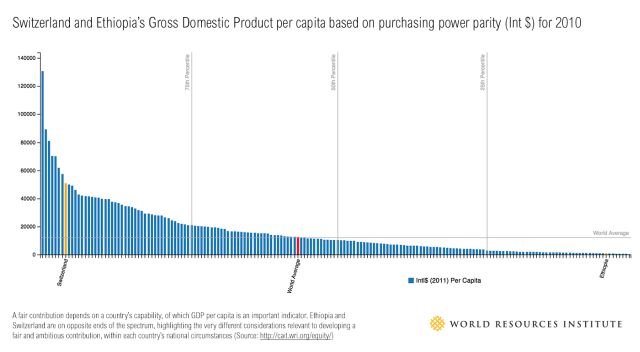 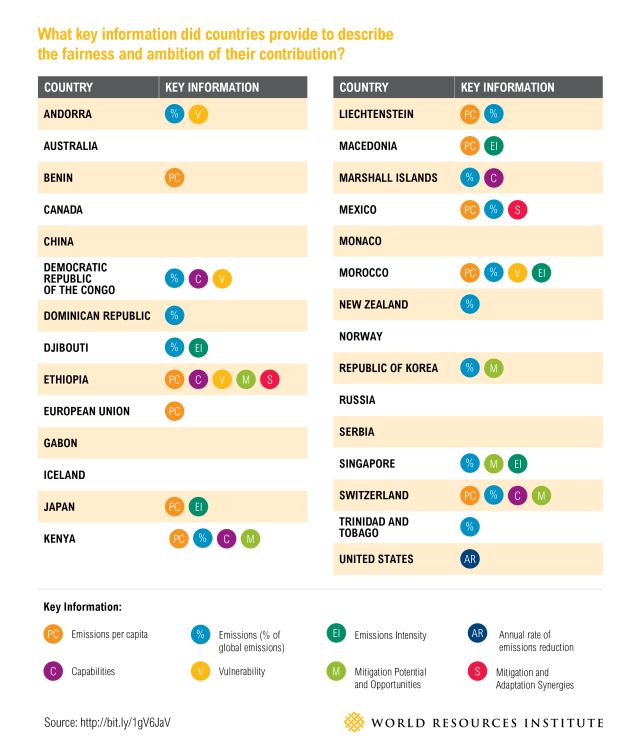 What’s Missing and Where Could Improvements Be Made?

All countries could benefit from including more data to explain their intended contribution. There has been a tendency for many countries to include statements that are unsupported by either quantitative or qualitative information, making accurate assessments or comparison very difficult.

In particular, the United States, European Union, Australia, Norway, Canada, New Zealand, Japan, Russia, China and the Republic of Korea could all provide more quantitative data to explain their emissions profile, capabilities and how their contribution realizes their mitigation potential. Key data that could provide valuable information includes historical emissions, per capita emissions, and emissions as a percentage of global emissions along with GDP or GDP per capita.

More countries, including developed nations, could also include capabilities and levels of vulnerability to climate impacts as key elements in considering how fair their contributions are. Countries could also address the ways in which climate action can provide economic and social co-benefits, and how it can be aligned with broader sustainable development objectives. That can include identifying synergies between mitigation and adaptation actions.

Discussions of fairness and ambition should also address the reference in the Lima COP decision to the objective in Article 2 of the UNFCCC, including stabilization of greenhouse gases in order to avoid dangerous climate change, as well as the need to adapt. Countries have not used quantitative metrics to describe the ways in which their INDCs are fair contributions to the global effort needed to reduce emissions.

Countries still in the process of developing INDCs should explicitly incorporate descriptions of fairness and ambition, and consider the information and factors that other countries have used so far in their INDCs. Countries should focus on providing information that has been used by a number of countries – such as aggregate and per capita emissions – while also considering additional important factors, such as capabilities and mitigation potential.

Inclusion of quantitative and qualitative indicators relevant to fairness and ambition can significantly increase the comparability of contributions, build trust among countries and ensure that all countries are proposing actions that are ambitious enough that they collectively limit global temperature rise to 2 degrees C (3.6 degrees F).

• LEARN MORE: For a full breakdown of each INDC in terms of transparency, see the CAIT Paris Contributions Map.