Fires across Brazil caught the world’s attention this August, with fears that burning — and subsequent damage to the Amazon rainforest — would only intensify when peak fire season hit in September. However, Global Forest Watch (GFW) analysis of NASA data shows that fire alerts in the Amazon decreased by 34% between August and September.

Amazon Fires Are Down. Can We Thank Brazil’s Fire Ban?

Fire season in Brazil typically peaks in September, so this reduction in fires in the Amazon is unexpected. Other forested regions in Brazil showed an increase in fire alerts in September, including the Cerrado — a tropical savanna where fire is a more natural feature of the landscape. In the wetter, Amazon region, fires are rarely natural and almost all burning is related to human activity. 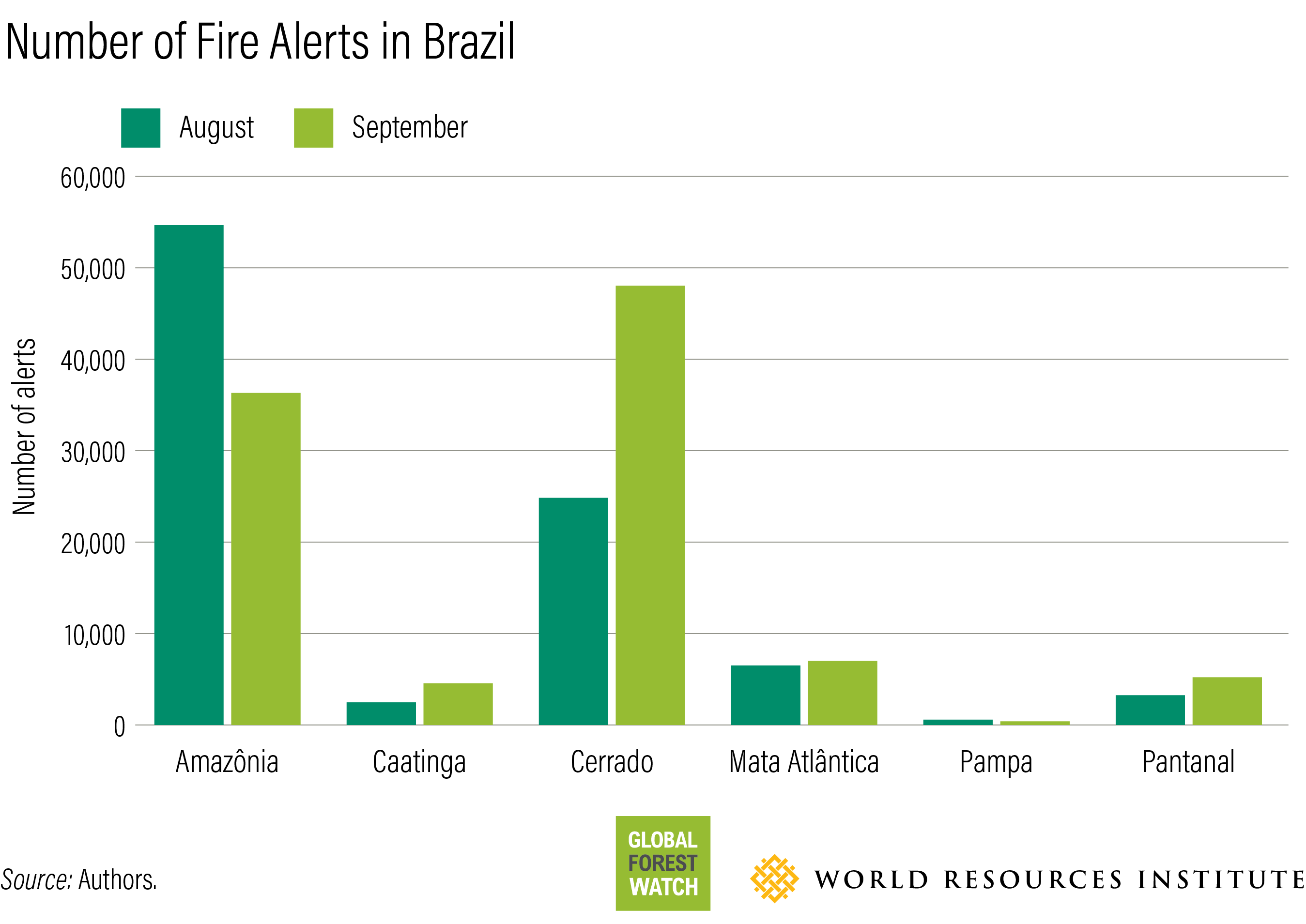 Amazônia—the Amazon biome— was the only region of Brazil that saw a drop in fires in September, which deviates from the normal upward trend in fires across the country.

So what explains the 34% decrease in fire alerts in the Amazon? It likely wasn’t the weather, as September was slightly drier than normal. The other potential explanation is the fire ban enacted at the end of August. During the peak of the crisis, when both national and international media attention was focused on the Amazon, President Jair Bolsonaro issued a TV and radio announcement declaring “zero tolerance” for environmental crimes. Law enforcement was dispatched to fight the fires and the government enacted a two-month ban on the use of fire to clear land. This ban was in effect across Brazil, but stricter rules applied within the Amazon, where we have seen the greatest reduction in fire alerts.

Even though private properties make up only 48% of the land in the Amazon, they accounted for 62% of the fire alerts detected in the Amazon region in August and September. These fires are usually set to prepare agricultural land for production – an authorized practice before the ban. 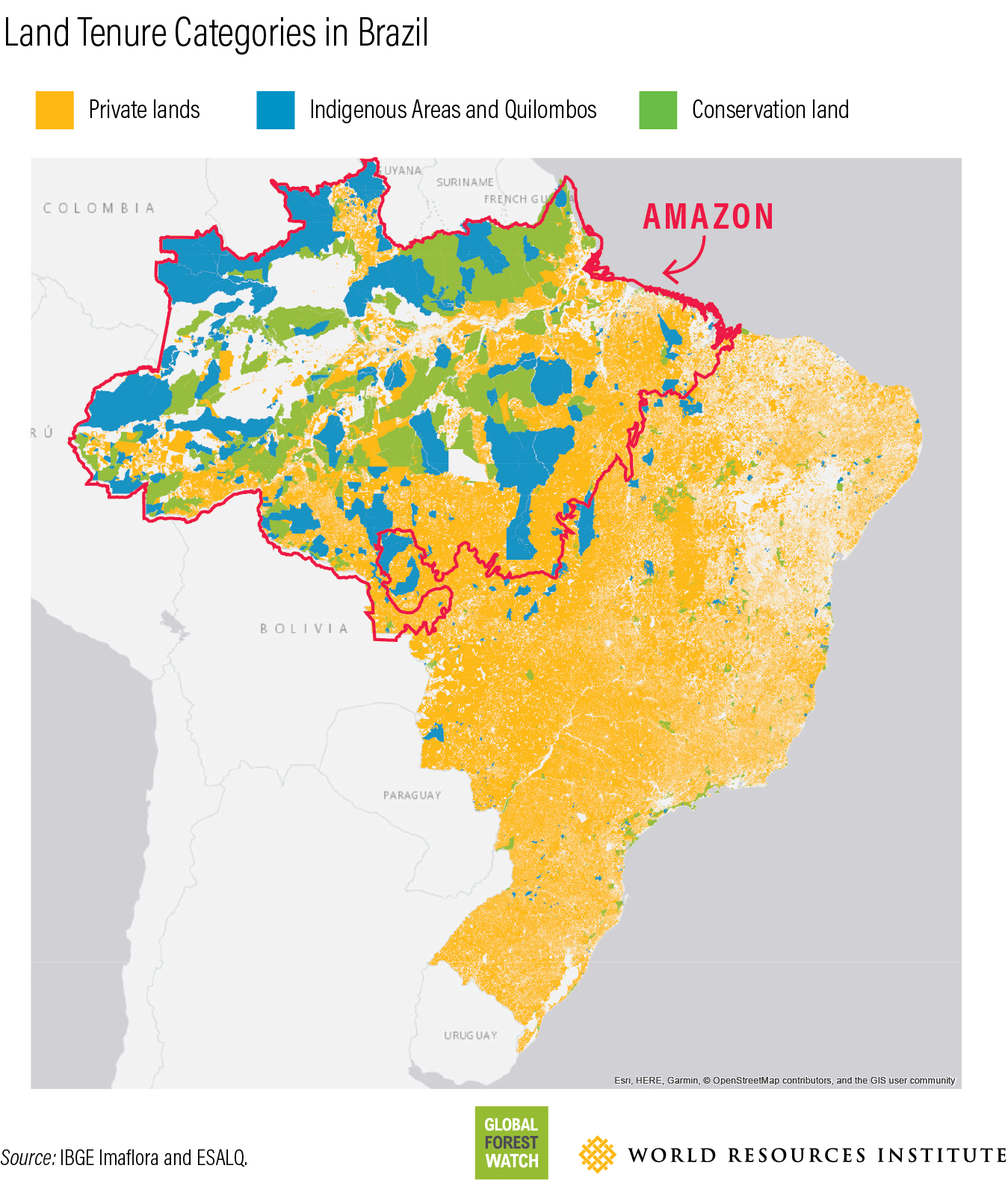 While the fires typically start on farmland, they often affect nearby forests. Farmers are legally required to set aside up to 80% of their land for conservation purposes and much of this land is forested. Over one-third of the fire alerts on private lands in August and September were detected in primary forests.

Roughly 14% of fires over the same time period occurred on conservation units and indigenous lands in the Amazon, which comprise 24% of the region and tend to be even more forested than private lands. Fires in conservation units are never legal, and these areas may also be affected by runaway fires from nearby land-clearing activities. Fires on indigenous lands could be part of the land management practices used by the community, since the fire ban did not apply to indigenous lands. Alternatively, these fires could also represent illegal encroachment from outside actors. 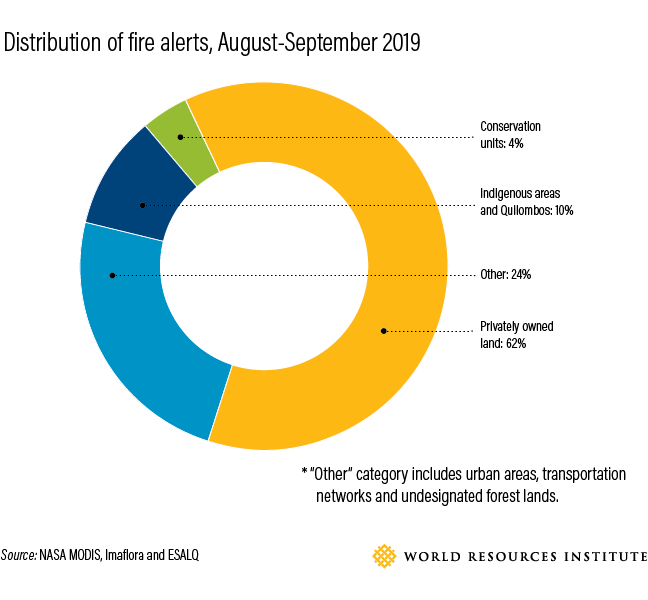 Dry Forests of the Cerrado Are Still Burning

Although fires have gone down significantly within the Amazon, they are still burning in the Cerrado. The dry forest of the Cerrado is a unique ecosystem that plays a critical role in storing carbon and maintaining watersheds. Fires can occur naturally here, and fire alerts detected from satellite cannot differentiate natural fires from fires set by humans. So far this year, fire counts for the Cerrado are in line with historical averages; however, the drying effects of climate change and increased agricultural activity in the region could result in increased fire threat to these forests in the future. 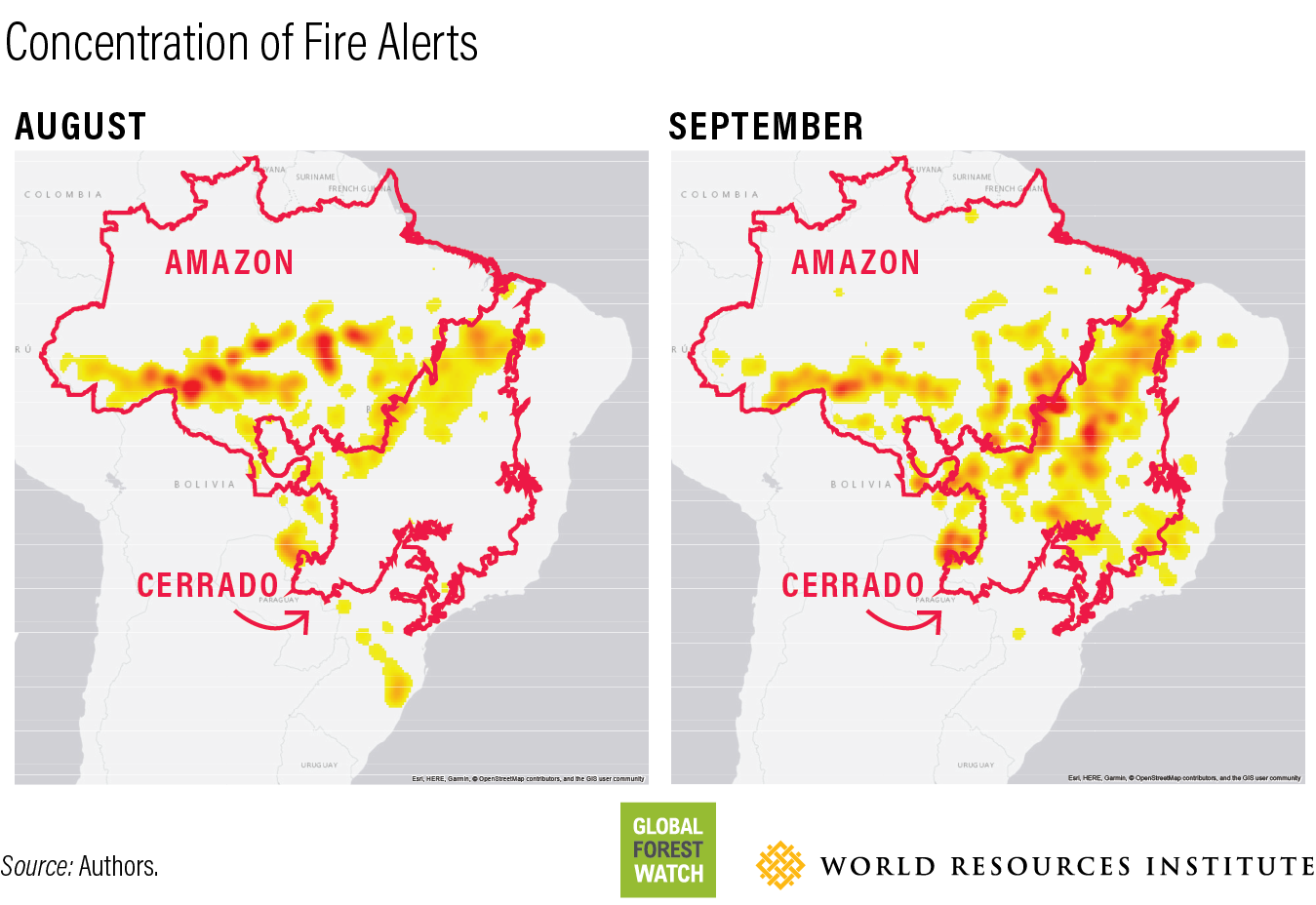 The highest concentration of fires moved from the Amazon biome—where the majority of Brazil’s primary forest is located— to the Cerrado and other parts of central Brazil in September.

The fire ban is scheduled to lift today, October 28, although Brazil’s fire season can continue into November. The reduction in Amazon fires seen in September suggests that recent attention given to this region – including the fire ban, public discourse and environmental enforcement policies – may have had a positive impact on curbing fires. Other critical forest biomes in Brazil have not received the same attention nor experienced the same reduction in fires.

Continued public and government attention to this issue will be critical for the remainder of this year’s fire season and beyond. The immediate aftermath of this year’s Amazon fire crisis demonstrates just how important this spotlight is.

What Can Global Forest Watch Tell Us About the Fires in Brazil?