WRI’s fact sheet series, How States Can Meet Their Clean Power Plan Targets, examines the policies and pathways various states can use to meet or even exceed their standards under the CPP while minimizing compliance costs, ensuring reliability and harnessing economic opportunities. This post explores these opportunities in Virginia.

As part of the new Clean Power Plan, the U.S. EPA requires Virginia to reduce its power sector emissions by 23 percent below 2012 levels by 2030. New analysis shows the state could go even further while harnessing economic opportunities.

Virginia’s power plants have already reduced their carbon dioxide emissions by 22 percent between 2005 and 2012, due in large part to using more natural gas and less coal, as well as lower overall electricity generation. While electricity demand is projected to rise in the coming years, capitalizing on existing clean energy opportunities can allow the state to surpass its Clean Power Plan mandate.

The state has already locked in one-third of the total reductions needed through planned actions like scheduled coal plant retirements and investments in renewables and efficiency. Taking three additional steps would meet and then exceed the 23 percent target:

Virginia currently has a voluntary goal to reduce its electricity consumption by 10 percent below 2006 levels of consumption by 2022. While electric generation in the state is projected to increase, partly due to increased demand, studies show a large potential for energy efficiency to curb demand growth in Virginia while lowering household energy bills. Doing so would put Virginia in a good position to meet its voluntary commitment.

2. Increasing use of renewable energy

Virginia’s utilities may participate in the state’s voluntary renewable portfolio standard program which has a goal that by 2025, 15 percent of electricity sold (relative to 2007 sales) is from renewable sources. Virginia is projected to generate roughly 8 percent of its electricity using renewable sources in 2025 (relative to 2007 sales), but the state has considerable untapped wind and solar potential. Capitalizing on this potential to achieve the voluntary goal—combined with meeting the efficiency target—would reduce power sector emissions by 27 percent.

3. Increasing the use of existing natural gas plants

Virginia’s most efficient natural gas plants, combined cycle (NGCC) units, generated less electricity than they were capable of producing in 2012. By running existing NGCC plants (and those already under construction as of January 2014) at 75 percent, Virginia could reduce power sector emissions by another 16 percent. 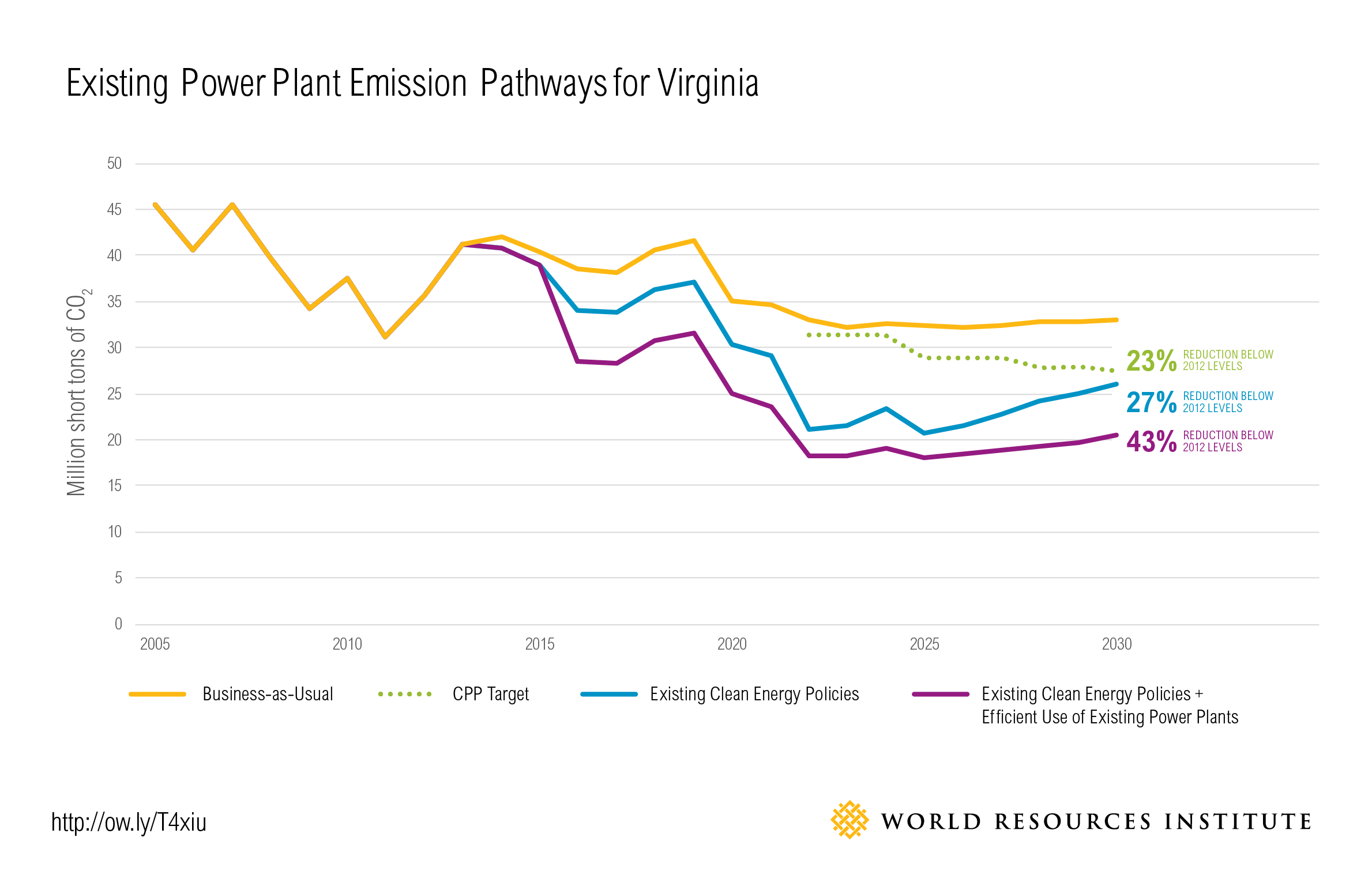 Not only are these reductions possible, they’re cost-effective. Consider the following:

Virginia Can Build On Progress Made to Date

Virginia has taken some steps to scale up renewable energy and efficiency, but a huge opportunity lies ahead. If it takes advantage of available infrastructure and underutilized clean energy resources, Virginia will be in a good position to surpass EPA’s standards for its existing power plants while maintaining grid reliability. Adopting EPA’s new source complement standard would further incentivize zero-carbon generation sources, and ensure that emissions from the state’s power sector do not rise with demand. These types of actions could create a new revenue stream for the state, lead to increased investment, and would make Virginia a clean-energy leader.

• LEARN MORE: Sam Adams and Kristin Meek will testify this evening at the Virginia Department of Environmental Quality (DEQ) listening session on the U.S. Clean Power Plan. The Virginia DEQ held six of these listening sessions across the state in order to gather input from the public to help inform the state’s review and implementation of EPA's final rules for existing power plants.

10 Steps to Achieve the US Emissions-Reduction Target