A new report from the Coalition for Urban Transitions shows that national governments that invest in low-carbon cities can enhance economic prosperity, make cities better places to live and rapidly reduce carbon emissions. The report finds that implementing low-carbon measures in cities would be worth almost US$24 trillion by 2050 and could reduce emissions from cities by 90%.

Negotiators made progress in a number of areas at the latest UN climate talks, which wrapped on May 10, but an overburdened agenda left them with a lot more ground to cover before the big climate summit (COP24) in Poland this December.

This working paper studies 10 cases from Europe, Asia, and the United States to highlight the variety of social, political, and environmental contexts within which CC and LEZ schemes were planned and implemented. It aims to provide public communication strategies to safeguard successful implementation of transport policies.

This paper sheds light on the initial long-term strategies that have been submitted to the UNFCCC and identifies key considerations for countries that are preparing to develop such strategies.

Bonn climate negotiations got underway, President Trump delayed his decision on whether the United States would stay in the Paris Agreement and the Arctic Council recognized climate change as an urgent threat.

ADVISORY: Press Call with US-Germany Experts on What to Expect from Chancellor Merkel’s U.S. Visit

Leading U.S. and international experts on the call will share perspectives on how climate and energy issues are likely to manifest in Merkel’s meeting with Trump, including security, migration and economic growth.

Germany aims to reduce its emissions 80-95 percent below 1990 levels by 2050. It's the first country to release a long-term emissions plan, with more countries likely to follow in the coming days.

What’s On the Table at Bonn Climate Talks?

We’re now entering the final, significant stages of negotiations leading up to the major climate summit in Paris in December known as COP21, where countries will reach a new international climate agreement. There are now two week-long negotiating sessions remaining before Paris; the first takes place next week in Bonn, Germany. What issues will negotiators face and what needs to happen at the Bonn meeting?

Bonn Climate Talks Outpaced by Progress Outside the Negotiations

As negotiators leave Bonn, Germany after two weeks of talks on the international climate agreement that will be concluded in Paris at the COP 21 summit later this year, one thing is clear: The pace of negotiations must speed up considerably.

A rare solar eclipse earlier this month threatened electricity blackouts in renewable energy-heavy Europe. When operators kept the lights on, they proved that the grid is ready for a clean energy future.

Bonn, Germany (March 21, 2015)– Since 2011, countries participating in the Bonn Challenge have restored more than 60 million hectares of forests and landscapes and are on track to meet an ambitious global restoration goal of 150 million hectares by 2020.

After winning Germany’s federal elections on September 22nd, Chancellor Angela Merkel is in the middle of difficult coalition talks to form a new government. Because Merkel’s party, the Christian Democrats, did not win an absolute majority in parliament, it must find a new coalition partner.

Overview of Delivering on the Clean Energy Economy

Germany’s energy transition (or “Energiewende”) is the most ambitious current effort to put a large industrial economy onto a sustainable energy path, recognizing the 21st century reality of a climate-constrained world. If the world’s fourth largest economy demonstrates that this shift is possible without undermining economic growth, it could be a major factor in enabling a global energy transition. And with climate change intensifying – 2012 was the 36th straight year of above-average global temperature, and 2011 and 2012 each produced more extreme weather events costing over one billion dollars each than any other year in recorded history – reducing greenhouse gas emissions is imperative for any future energy system. Thus, the Energiewende is critical to the ongoing fight against global warming.

Bringing together independent research institutes and civil society groups from key countries around the world to monitor national progress on climate change policy.

Signs of Trouble and Progress as Bonn Climate Talks Wrap Up

Much like recent extreme weather events in Europe and the United States, this month’s intersessional in Bonn, Germany could be described as volatile. But despite some “stormy” discussions, rays of light could still be seen in some areas.

The low point that seems to be generating the most attention is Russia preventing a key UNFCCC working body from making any progress. Russia, along with Ukraine and Belarus, blocked the Subsidiary Body on Implementation (SBI), which works on both substantive and administrative implementation issues, from moving forward on its agenda. Russia appeared to still be upset about the process during a last-minute decision at COP 18 in Doha, when the rules for the next commitment period of the Kyoto Protocol were quickly gaveled through over their objection. Refusing to let the body take up its work unless it included an agenda item on procedural issues for the climate talks as a whole, Russia rejected numerous attempts at compromise.

The blockage in the SBI discussions created noticeable ripples of nervousness throughout the negotiating hall. But in spite of the intermittent gloominess, there were also clear rays of light. What emerged most palpably was an insistence by nearly all the countries here that these kinds of tangles must be avoided, and that they are committed to moving forward on the key issues facing the UNFCCC negotiations and, not incidentally, the world.

As evidence of climate change mounts, President Obama has made it clear that tackling this issue will be a priority in his second term. Yet, as weeks go by, the administration has been slow to clarify its strategy. With each passing day, it becomes harder and more expensive to rein in greenhouse gas emissions.

Meanwhile, other global powers are moving forward--and many of them carry valuable lessons which American policymakers can look to. The most successful countries are showing national leadership, strong and consistent policies, and commitment to clean energy.

Where, then, are signs of progress on clean energy?

High on the list is Germany, whose ambitious energy transformation strategy--or “Energiewende”--aims to reduce greenhouse gases by 80 to 95 percent by 2050, compared to 1990 levels. This will be achieved by enhancing energy efficiency, reducing primary energy consumption by 50 percent, and ramping up renewable energy to at least 80 percent of electricity consumption in the same time-frame.

Building on Momentum: 2 Ways to Make Progress at the Bonn Climate Talks

Delegates at the April UNFCCC intersessional in Bonn, Germany made some encouraging progress. As negotiators gather again this week, it’s important that they build on this progress and take action on two key topics: raising ambition, and establishing core elements of the 2015 international climate action agreement.

Indeed, there’s an even greater sense of urgency since delegates met for the April intersessional. The world crossed a perilous and alarming threshold, with atmospheric carbon dioxide levels exceeding 400 ppm, a level that has not been experienced in at least 800,000 years and possibly not for millions of years. Plus, this may be the last intersessional before COP 19 in Warsaw in November. Negotiators must move forward on raising ambition and establishing the 2015 Agreement if COP 19 is to have a successful outcome.

The need for countries to make more ambitious emissions-reduction commitments remains self-evident—even more so, now that the world has exceeded 400 ppm of atmospheric carbon dioxide. In Bonn, negotiators are set to focus on the transformation of the energy system.

U.S. Energy Policy Should Take A Lesson From Germany’s Energiewende

This post originally appeared on Bloomberg’s “The Grid” blog.

Germany is in the midst of an unprecedented clean energy revolution. Thanks to the “Energiewende,” a strategy to revamp the national energy system, Germany aims to reduce its overall energy consumption and move to 80 percent renewable energy by 2050. The country has already made considerable progress toward achieving this ambitious goal.

In fact, other countries like the United States can learn a lot from the German clean energy experience. That’s why WRI is hosting a German energy speaking tour in the United States this week, May 13th-17th. Rainer Baake, a leading energy policy expert and key architect behind the Energiewende, and WRI energy experts will travel to select U.S. cities to share lessons, challenges, and insights from the German clean energy transformation. They will be joined by Dr. Wolfgang Rohe and Dr. Lars Grotewold from Stiftung Mercator. 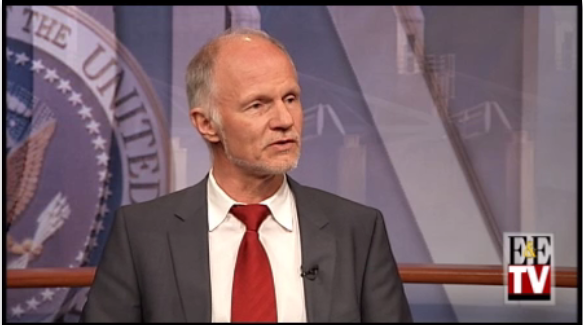