The Man Who Stopped the Mine. Q&A with Prafulla Samantara, 2017 Goldman Environmental Prize Winner. He endured kidnappings, assaults and attacks. But after more than a decade of protests and court battles, Prafulla Samantara stopped an open-pit bauxite mine from threatening India's Dongria Kondh tribe.

Event was livestreamed via Nexusmedia.tv.

Environmental activists all over the world are fighting to protect local people and resources despite increasingly being under threat. They stand up to powerful corporate and political interests, refusing to be silenced.

On April 26, 2017, WRI will recognize Prafulla Samantara, one of this year’s prestigious Goldman Environmental Prize winners. In 2003, Samantara saw a newspaper article announcing Vedanta Resources’ plan to build an open-pit bauxite mine in eastern India’s Niyamgiri Hills. The proposed $2 billion project would have destroyed more than 1,600 acres of forest, polluted a critical water source and displaced members of the 8,000-person Dongria Kondh tribe in the process.

After reading the notice, Samantara biked across the Niyamgiri Hills to mobilize the indigenous Dongria Kondh people, who were unaware that the Indian government had appropriated their sacred lands to an $11.4 billion corporation.

He also filed a lawsuit. After a decade-long legal battle, India’s Supreme Court issued a landmark ruling in 2013 that affirmed the Dongria Kondh’s land rights.

After sharing his incredible story, Samantara joined a conversation with experts on access to justice, indigenous land rights and sustainable development.

The Goldman Environmental Prize, one of the most prestigious environmental awards in the world, recognizes champions from six continents.

Many environmental activists face unconscionable retribution for their work. In recent years, two Goldman Environmental Prize winners, Isidro Baldenegro López and Berta Cáceres, were killed. Nearly half of the 281 human rights activists murdered globally in 2016 were champions of environmental, land and indigenous rights. 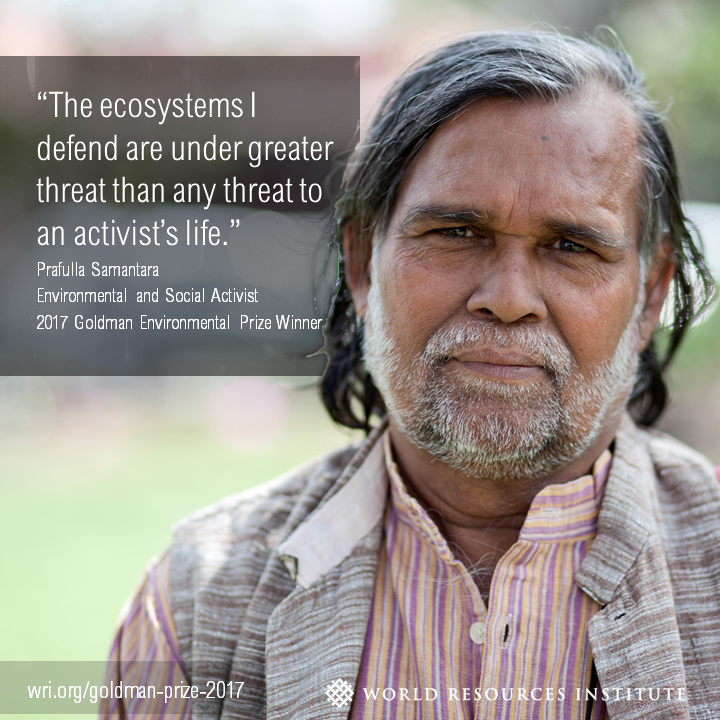