As U.S. cities and counties transition to clean energy for their own operations and communities, many are finding that stakeholders and policies beyond their jurisdictions affect their ability to purchase clean energy. Policy and regulatory decisions made by states, utilities, public utilities commissions and wholesale market governing bodies determine the clean energy procurement options available to cities and counties. This can create challenges for meeting locally-defined resolutions and commitments.

To overcome these challenges and drive faster progress on renewables and carbon-free goals, local governments are starting to engage with old stakeholders in new ways to change the rules of the game. By removing regulatory and legislative obstacles, local governments are creating new pathways to access affordable, clean energy. 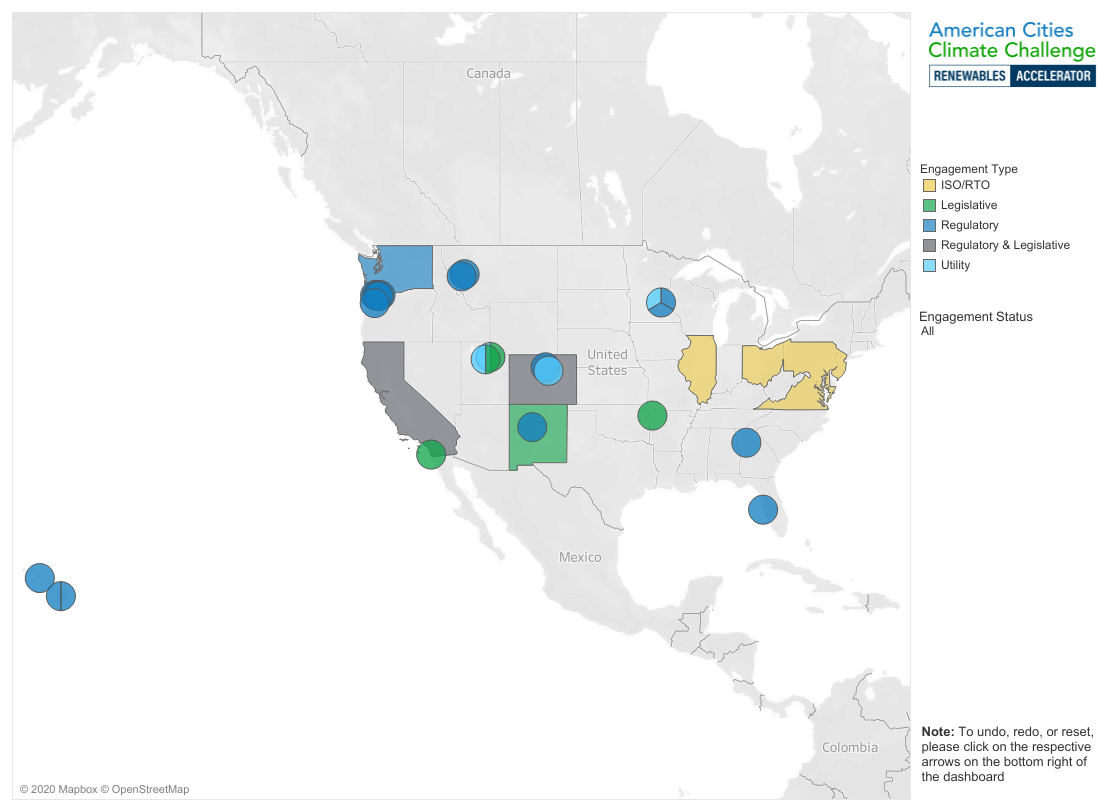 Here are four ways local governments are engaging with stakeholders to decarbonize their electricity supply:

Cities and counties often are required by state law to buy electricity from a regulated investor-owned utility (IOU) and lack the ability to choose their electricity supplier or generation source. While some IOUs offer renewable energy programs, these options don’t always meet city needs. Worse still, some cities have no options for purchasing renewable electricity.

To overcome these circumstances, some local governments are partnering with their utilities. For example, the City of Denver and Xcel Energy developed a partnership agreement in 2018 to define and collaborate on shared climate and energy goals.

These types of partnership agreements can lead to the creation of new renewables programs or custom utility solutions that enable local governments to purchase renewables on a large scale. In North Carolina, Duke Energy and the City of Charlotte signed an agreement that laid out the ways they could partner on clean energy work. One year later, Charlotte became the first city to sign a large-scale deal through Duke Energy's new Green Source Advantage green tariff program.

Many key decisions around the implementation of state energy policies, including decisions that govern IOUs, are made by state public utility commissions (PUCs). PUCs allow stakeholders to voice their needs as electricity customers, which can be a good opportunity for local governments to advocate for more renewables. However, engaging in commission proceedings can be a time-consuming and cumbersome process for local governments with limited resources to navigate.

Increasingly, cities and counties are asking for more renewables on the grid by commenting and providing testimony to their state PUC. This includes commenting on their utility’s integrated resource plans (IRPs), which are long-range plans that communicate how an electric utility intends to develop new generation assets over the next 10-20 years. In many states, utility IRPs are required by law, and providing input on them can be an impactful way for local governments to influence their regional grid mix and increase renewable energy generation.

During the Indianapolis Power & Light Company (IPL) IRP process, the City of Indianapolis submitted a public letter to encourage IPL to explore a more aggressive retirement scenario for the Petersburg Coal Generating Station and increase renewable generation. Indianapolis cited an October 2019 report by Rocky Mountain Institute that found that clean energy portfolios declined in cost by 80% since 2010, and are now lower-cost than new gas plants and are projected to undercut the operating costs of existing gas plants within 10-20 years.

In comments to the Georgia Public Service Commission (PSC), the City of Atlanta asked Georgia Power to expand residential energy efficiency and renewable energy programs, provide greater access to utility data to improve energy efficiency efforts, increase municipal access to renewable energy and build a new local microgrid to improve community resilience. In response to customer comments like these, the PSC required Georgia Power to more than double solar energy procurement over the next five years from one gigawatt (GW) to 2.2 GW.

Local governments are also increasingly advocating for alternative forms of utility regulation and business models. This includes performance-based regulation (PBR), a type of utility reform that incentivizes electric utilities to demonstrate performance on metrics such as greenhouse gas reduction, efficiency and customer service. This approach contrasts with traditional “cost-of-service” business models that incent utilities to build more physical assets, which generally result in new buildouts of gas power plants and pipelines, locking in emissions for years to come. The City and County of Honolulu and the County of Hawaii have been actively engaged in advancing PBR through workshops, working group meetings, filing written comments to Hawaii’s PUC and creating thoughtful proposals recommending new PBR mechanisms for their utility to adopt.

When stakeholders come together to voice their needs to legislators, it has the potential to create large-scale change. Local governments are starting to get involved at the state level by calling for changes to state climate and clean energy legislation. There are a few high-impact policy pathways that cities can pursue:

Local governments are asking state policymakers to remove barriers that prevent renewable energy procurement. Stakeholder input recently helped pass the Virginia Clean Economy Act of 2020, which created the state’s first clean energy standard and lifted constraints on existing state laws that limited access to third party financing options that can bring down the cost of renewables. Similarly, the City of Fayetteville, Arkansas, alongside other large customers and local governments, successfully called for increased access to third-party financing for renewables, which would ultimately make clean energy procurement more affordable for consumers.

In Utah, local governments came together to ask the state to enable high-impact pathways for procuring renewables, leading to the ratification of the Community Renewable Energy Act of 2019. These local governments are now collaborating with the state’s electric utility, Rocky Mountain Power, to develop a utility program through which they can purchase 100% renewable energy.

Cities and counties are advocating to retire uneconomic fossil fuel power plants by enabling or expanding securitization legislation. Securitization can be used to allow utilities to issue bonds based on the guaranteed returns they are making from the uneconomic plants and use the proceeds to build or buy cheaper renewable energy. The shift to lower-cost generation allows utilities to both make more money and lower rates for their customers while phasing out fossil fuel power plants.

Community choice aggregation (CCA) allows local governments to have full control over their electricity supply, providing the ability to procure renewable energy for their municipal operations, residents and in some cases, small businesses. To make progress toward community-wide renewable energy targets, cities are starting to push for legislation to enable CCA or to expand renewable procurement through an existing CCA. CCA can be a key mechanism for achieving community-wide clean energy goals if a city’s electric utility does not offer the procurement pathways needed to achieve its renewable energy target. Cincinnati signed the largest municipal renewable energy deal in U.S. history, in part because of the control the city had through its CCA program.

Forming a coalition with other local governments can help amplify a city’s message to its state legislators. For example, Colorado Communities for Climate Action (CC4CA), a coalition that consists of 33 Colorado counties and municipalities, regularly advocates for state climate policy. Members of the coalition meet with legislators, provide testimony at state legislative sessions, write op-eds and coordinate strategy for local governments. CC4CA's collective voice was a powerful lever that helped  pass one of the strongest state climate bills to date, which includes both short-term and long-term clean energy targets for Colorado.

4. Getting Involved in Wholesale Energy Markets

Rules made in wholesale markets can impact local government clean energy goals and present obstacles for clean energy procurement. Participation in market-level decisions and stakeholder processes has traditionally been dominated by utilities and generators, but that is starting to change.

One recent decision by the Federal Energy Regulatory Commission could hamper the development of renewables in states that participate in the PJM wholesale electricity market. The decision directs PJM to implement a minimum offer price rule for renewable generation resources supported by state policies like renewable portfolio standards and zero emissions credits. This rule would effectively raise the minimum price of renewables and, ultimately, ratepayer costs across the board. Some states, including New Jersey and Virginia, are considering leaving the PJM capacity market to preserve their ability to offer incentives to develop renewable energy.

The PJM Cities and Communities Coalition is the first ongoing collaborative effort for cities to address barriers in the PJM wholesale energy market. As part of the Coalition, cities like Washington, D.C., Philadelphia and Chicago are joining together to provide education to members on market issues, considering becoming formal voting members and identifying priority issues where cities can engage. One of the Coalition’s early efforts was a public letter to the PJM Board of Managers during its search for a new CEO, urging the search committee to hire a candidate who could move the PJM market toward a clean energy future.

Engaging with utilities, commissions, state policymakers and wholesale market governing bodies is new and unfamiliar territory for many local governments. Cities and counties have struggled to understand their energy policy context and opportunities, how and when to engage with utilities, regulators and legislative staff and whether to involve other stakeholders. And once they decide to engage, local governments often struggle to dedicate the resources and funding necessary to participate in ongoing efforts.

Regardless of the approach, collaborative efforts are key to overcoming these challenges and enabling more effective participation. This allows local governments to leverage limited local resources, reduce political risks and develop a strong collective voice. This collective voice in particular can often be more powerful than one local government acting alone.

The Local Government Renewables Action Tracker is an important new resource cities and counties can use to see how other local governments are engaging with stakeholders and evaluate the options available for advancing their own clean energy projects and goals.

As cities and counties continue to develop their voices as large energy consumers, we should expect to see them get more involved in state regulatory proceedings and legislative hearings, innovative city-utility partnerships and market decision-making processes. Local government engagement like this has significant potential to accelerate decarbonization in the U.S. by dramatically expanding local access to renewables for city operations and communities alike.

Leaders in U.S. clean energy development are beginning to realize how important it is to help cities achieve their renewable energy goals. Last year, Bloomberg Philanthropies announced the American Cities Climate Challenge, a two-year program that provides cities with powerful new resources to help them meet their near-term carbon reduction goals. Together with Bloomberg Philanthropies and the Urban Sustainability Directors Network, World Resources Institute (WRI) and Rocky Mountain Institute (RMI) formed the Renewables Accelerator to provide technical support to U.S. cities as they explore new and innovative strategies for procuring renewable energy to meet these goals. Learn more about the Renewables Accelerator here.